Unless the United Nations moves soon to outlaw nuclear testing, the nuclear nonproliferation regime will weaken and possibly collapse. 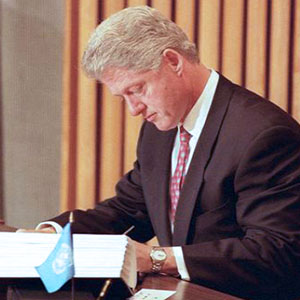 Over the next twenty years, in spite of US and Soviet assurances during the negotiations, the review conferences failed to produce any of the interim nuclear arms limitation measures—sought in 1968 most significantly, with respect to the test ban—to the deep dismay of most of the NPT non-nuclear weapon states. By the terms of the treaty, the NPT was due to expire in 1995, unless the parties agreed, on a one-time basis, to extend it indefinitely. In order to secure the consent of the world community to make the NPT permanent, the NPT nuclear weapon states made much the same commitments in 1995 as they did in 1968 when the NPT was signed. Only this time, with respect to the Comprehensive Nuclear-Test-Ban Treaty (CTBT), their commitment was stronger: the CTBT was to be achieved in one year.

And it was, to a large degree as a result of leadership by the United States, driven by the idea that in addition to the security benefits of such a treaty, the honor of the United States was at stake as well, since it had pledged a CTBT in exchange for a permanent NPT extension, an important US national goal. The CTBT was signed on September 24, 1996, at the United Nations in New York, where it had just been endorsed by the UN General Assembly by a vote of 158-3. President Bill Clinton was the first national representative to sign and today there are 161 parties including Russia, the United Kingdom, and France, three of the five NPT-recognized nuclear weapon states. However, in order to give assurance to all that the CTBT would not come into force without participation from all states with potential or actual nuclear weapon programs, the treaty requires—prior to entry-into-force—the ratification of all forty-four states that had nuclear facilities on their territory at the time the treaty opened for signature. Thirty-seven of these states have ratified the CTBT. The most prominent holdout is the United States, but the list includes China and Israel, both of which are waiting for the United States; Egypt, which is waiting for Israel; and India, Pakistan, Iran, and North Korea. India and Pakistan are both observing nuclear weapon test moratoria. It would be difficult for Iran to remain one of two holdouts while claiming it had a peaceful program. Likely, it would come down to North Korea. Thus, upon US ratification, the door to the CTBT’s entry-into-force would be opened with some chance of success.

Nearly fifteen years have lapsed since the defeat of CTBT ratification in the US Senate in 1999. The treaty is all the more important because of its significance for nuclear safety and stability. During this period, the NPT has grown weaker without the CTBT in place. There has been a nuclear weapon test moratorium in place for twenty years—first declared by Russia in 1991 and then formally adopted by the United States in 1993, and then joined shortly thereafter by all the world’s relevant nuclear states except North Korea—but it is not a legally binding arrangement. The moratorium is still holding, but will it do so permanently? There have been three nuclear weapon tests by North Korea in recent years. However, the 337 monitoring stations of the International Monitoring System (IMS) are more than 80 percent complete. The United States, conducted more than 1,000 nuclear weapon tests, more than the rest of the world combined. A test ban in force would lock in the superior technology of the United States; it would prevent the new acquisition of a modern nuclear weapon stockpile; and it would hinder upgrading an existing sophisticated arsenal. The NPT— threatened by the nuclear programs in Iran and North Korea, battered by conditions in the Middle East, and with further proliferation potentially looming—needs the CTBT for political balance in the long term. Since 1999, there has been no movement in the Senate, and although the Barack Obama administration has been rhetorically supportive, thus far it has not been inclined to press for Senate approval of the CTBT.

However, time is not on our side. Indeed, time has likely run out for this administration. The estimated two preparatory years required for engaging, educating, and persuading members of the Senate could place the commencement of ratification proceedings right in the middle of the 2016 presidential election process, an unwise proposition. US ratification seems improbable until 2017 or 2018 at the earliest, and with completely unknown political context thereafter. The United States ratified the Geneva Protocol for the Prohibition of the Use of Asphyxiating, Poisonous or Other Gases, and of Bacteriological Methods of Warfare forty-nine years and ten months after signature. But the NPT can’t wait that long. The NPT is, and has been for many years, the most important international security arrangement we have. Its loss would be catastrophic and irreparable.

Since time is of the essence, and since the treaty remains blocked in the US Senate, what can be done to help salvage the “glue” of the NPT? Until ratification becomes possible, one possible interim step might be for the UN Security Council to declare by resolution that any nuclear weapon test anywhere, anytime, by anyone, is a threat to international peace and security, thereby making a nuclear weapon test a violation of international law. The prohibition would then be in place. The moratorium would be given legal force and its longer-term survival thereby assured. With the IMS nearly complete, a prohibition would do much to strengthen the NPT. Such action by the Security Council arguably might not be such a big step from a legal viewpoint. Pursuant to accepted rules of international law, a principle—such as a ban on nuclear weapon testing—can become a peremptory norm under international law, binding on all states, for example if the principle is part of a treaty (even if the treaty is not yet in force), and if: there have been widespread treaty ratifications, no significant contrary practice for a period of time, and if the principle is important to humanity. The case of the CTBT, with 162 ratifications, certainly qualifies: there have been no nuclear weapon tests anywhere for fifteen years, except those by outlier North Korea, and, it should go without saying that this is a principle important to humanity. Indeed It might not be a stretch to argue that a nuclear weapon test series by any state, for example Russia, China, or Iran, could be viewed by most if not all states as a real threat to international peace and security.

Such a resolution by the Security Council could be given additional political status by the prior passage of a similar resolution by the UN General Assembly (GA). It is possible that a GA process could reveal that, while a great majority of UN member states would vote for such a resolution, key states (e.g. nuclear-armed India, Pakistan, or Israel) remained opposed, which could then prompt the Security Council to postpone any similar action until the concerns of such states are resolved. If their concerns cannot be satisfactorily addressed, the Security Council could proceed, not by resolution, but by a comparable statement by the president of the Council, which would carry moral, but not legal, force.

Last October, I raised this issue and this proposal in a speech on the margins of the United Nations. Subsequently, I have mentioned this concept in speeches elsewhere. Privately, some significant individuals have expressed interest. But nothing has happened or appears likely to happen in the near future. However, something needs to be done to enhance the security of the moratorium and to strengthen the political balance of the NPT. Failing a surprise change of heart by the US Senate to ratify the treaty, alternative action to strengthen the nuclear test prohibition and, by extension, the NPT itself, should be explored. The Limited Test Ban Treaty of 1963, which prohibited nuclear weapon tests in the atmosphere, underwater, and in outer space, has always been regarded as President John F. Kennedy’s most significant legacy. Given President Obama’s emphasis on controlling nuclear weapons, and in particular the importance of ratifying of the CTBT, it would be unfortunate if our current president left office without a similarly significant legacy of having successfully converted the moratorium into a legally binding obligation.

Ambassador Thomas Graham, Jr., is Executive Chairman of Lightbridge, a leading provider of nuclear energy consulting services. As a US diplomat he was involved in the negotiation of every major arms control and nonproliferation agreement from 1970 to 1997.