Atomic Kingdom? Not So Fast…

Saudi Arabia’s reported interest in nuclear weapons is most likely less about getting the Bomb than it is an effort to coerce allies and keep options open. 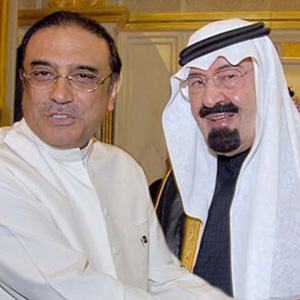 As Iran bolsters its nuclear weapon breakout capabilities and the United States and its allies seek to negotiate constraints on them, Saudi Arabia’s leaders have both explicitly and implicitly warned that they may pursue their own nuclear weapons. Most recently, BBC Newsnight reported on November 6—citing a senior NATO decision maker privy to intelligence reports—that “nuclear weapons made in Pakistan on behalf of Saudi Arabia are now sitting ready for delivery.” The Saudis immediately responded with a statement that did not refute the allegations, and instead highlighted the kingdom’s nonproliferation credentials, criticized the UN Security Council for its failure to achieve a “nuclear [weapon] free zone” in the region, and called on Iran to respond to international pressure and ameliorate “regional and international uncertainty about the peacefulness of its nuclear programme.”

The BBC story, posted on the eve of major new negotiations over Iran’s nuclear program, is just the latest in a string of similar reports over the past few years. To cite just a few key examples, a decade ago, the Guardian (British media seem to be the preferred outlet for Saudi nuclear-related leaks) reported on supposed internal debates within the kingdom about how best to respond to a nuclear-capable Iran. Three options were reportedly on the table: acquiring a Saudi nuclear deterrent, maintaining or bolstering ties with a nuclear-armed ally, or redoubling efforts to negotiate a regional nuclear weapon-free zone. In February 2012, a London Times correspondent was summoned to Riyadh and told by a senior official that the kingdom could acquire nuclear weapons “within weeks” of Iran doing so, and that an Iranian test would trigger both the purchase of “off the shelf” weapons from abroad, presumably from Pakistan, and the launch of a domestic nuclear weapon program. Such reports are not limited to the nuclear domain; in recent years, Riyadh has allowed information about its missile programs, which might serve as delivery systems for any future Saudi nuclear weapons, to trickle out, as documented by my colleague Jeffrey Lewis and others. Many observers take this information at face value, but is Saudi Arabia really on the cusp of acquiring nuclear weapons?

The good news is that—at least for now—the answer is almost certainly no. Based on information in the public domain, we know Saudi Arabia helped finance Pakistan’s nuclear weapon program, in the context of broader aid to Pakistan. It appears likely that at least an implicit quid pro quo exists under which Saudi Arabia could procure some sort of nuclear weapons capability from Pakistan in extremis. Precisely what this would entail—overt weapons transfers, forward-deployment of Pakistani nuclear weapons, or merely sharing of nuclear weapons production-related technologies—remains a matter of speculation. But for the foreseeable future, both Saudi Arabia and Pakistan will face huge disincentives for carrying out such transfers. Both states would risk incurring the wrath of powerful patrons, and especially the United States, on whose good graces they continue to depend, notwithstanding the strains already evident in both Riyadh and Islamabad’s relationships with Washington. Moreover, Pakistan is locked in an arms race with archrival India, and New Delhi’s long-term nuclear weapon production capabilities significantly exceed those of Islamabad, so the latter can ill-afford to spare a meaningful number of nuclear weapons. What, then, to make of all the reports about supposedly imminent Saudi nuclear weapon acquisition?

History suggests that while some states have trumpeted their potential desire for nuclear weapons—think Germany in the early years of the Cold War, or Japan more recently—they tend not to be those that later went on to actually acquire them. And for good reason: calling attention to proliferation intentions is counterproductive if one is intent on actually proliferating. Instead, states tend to draw attention to their potential proliferation in the service of another goal: rallying others to address the security concerns that are motivating potential proliferation, and especially securing protection from powerful allies. At least one state, though, trumpeted its potential proliferation while actually pursuing nuclear weapons, and the case is an instructive one for analyzing Riyadh’s recent nuclear saber rattling.

In the early 1970s—in response to perceived security threats and uncertainty about the United States’ alliance commitment in the context of US retrenchment and increased emphasis on allied burden sharing—South Korea initiated a modest nuclear weapon program. (The case is discussed at greater length in an article, co-authored with Eric Lorber, forthcoming in the Journal of Conflict Resolution.) Seoul established a Weapons Exploitation Committee, which quietly procured relevant components on global markets, and entered into secret negotiations with France to purchase reprocessing technology for separating weapon-usable plutonium from spent nuclear fuel.

Seoul’s nascent nuclear weapon program appears to have been intended both to coerce Washington to bolster its commitment to South Korean security and to lay the groundwork for a domestic nuclear deterrent, should Washington fail to step up. Of course, Washington could only be expected to respond to Seoul’s potential proliferation if it knew about it, so South Korean policy makers both privately and publicly conveyed their potential interest in nuclear weapons and hinted they might be actively pursuing them, much as Saudi leaders have done in recent years. For example, in 1975, South Korean President Park Chung Hee told the Washington Post that if Seoul lost confidence in the US nuclear umbrella, it would pursue its own nuclear weapon capability.

Washington’s response is instructive for the Saudi case too: Washington did ultimately offer Seoul the substantially strengthened security assurances it sought, but it framed that offer coercively: Seoul could accept a more robust alliance relationship while forswearing proliferation, or it could pursue its own nuclear weapons and risk the broader political and economic relationship by doing so. In May 1976, then-Secretary of Defense Donald Rumsfeld, echoing earlier messages conveyed by his colleagues, bluntly told his South Korean counterpart that the United States would “review the entire spectrum of its relations with the [Republic of Korea]” if Seoul insisted on developing nuclear weapons.

It bears emphasizing that Saudi Arabia has a long history of outsourcing its security, leveraging its oil wealth and the political leverage it yields to induce others to protect it from external threats and to prop up its regime domestically. But could Riyadh really stomach the overt nuclearization of its long-time rival—if it came to that—without responding in kind?

The security dimension of a nuclear-armed Iran would undoubtedly be a challenge for Saudi Arabia, but there is little reason to think a Tehran armed with nuclear weapons would be able to push its neighbors around any more than a nuclear-armed Israel has been able to coerce its Arab antagonists. And the United States and other powerful states have enormous vested interests in keeping Saudi oil flowing, and thus in protecting Saudi Arabia from Iran, no matter how implicit or explicit their security assurances to Riyadh might be. The politics more likely favor the implicit end of the spectrum. Conversations this author has had in recent years with regional policy makers and those with insight into their thinking suggest that the United States has at times offered more explicit assurances to various regional states, specifically in the context of Iran’s nascent nuclear capabilities. But those offers have been repeatedly rebuffed, in large part because regional states were loath to appear too dependent on Washington.

The prestige factor might be dicier than the security dimension. To the extent that the two can be distinguished, the rivalry between Tehran and Riyadh is even sharper on the prestige front than on the security one. External guarantees, whether implicit or explicit, help little and, as suggested above, may actually hurt on the prestige front. At the same time, Saudi Arabia would be taking a huge gamble if it risked undercutting its relationship with the United States and other allies to go it relatively alone as a nascent nuclear power. While Riyadh’s fungible oil assets guarantee it will always find at least some partners—even stalwart nonproliferation advocate the United States would presumably not be in a position to wholly sever ties with a nuclear-armed kingdom—Saudi proliferation would nonetheless dramatically strain that and many other of its relationships.

How Saudi Arabia would respond to a nuclear-armed Iran, and especially to the prestige dimensions, remains an open question. So, too, is how the kingdom would respond to lesser degrees of Iranian nuclearization, which are more likely for the foreseeable future since Tehran faces significant disincentives to going overtly nuclear. Saudi Arabia’s recent behavior suggests not only that it is concerned about Iran’s growing nuclear capabilities and may be hedging its own bets in the nuclear realm, but also that it has not committed to nuclear weapon acquisition and that its future behavior will depend on how the United States and others engage it going forward.

Philipp C. Bleek is an Assistant Professor in the Graduate School of International Policy and Management at the Monterey Institute of International Studies and a Fellow at the James Martin Center for Nonproliferation Studies.