Punish Assad with Law, Not Lawlessness

Unilateral military action is not the best way to hold Syria’s president accountable for the use of chemical weapons against his own people. 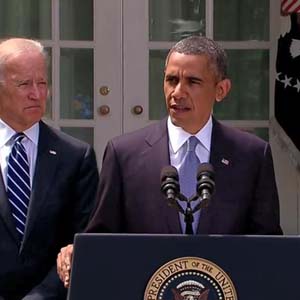 The perpetrators of the chemical weapons attacks against the people of Syria should be called to account for crimes against humanity. I have often argued for vigorous enforcement, including with unilateral military action when appropriate, of international agreements for limiting and prohibiting weapons of mass destruction. However, if the United States responds unilaterally with military attacks against Syria, the Obama administration will have appointed itself not only the world’s policeman, but also its judge, jury, and executioner. Worse, by doing so the administration will likely prove itself capricious, ineffective, and, indeed, lawless in each of those roles and will undermine the very system of international law it claims the right to enforce.

President Obama, Secretary of State John Kerry, and other US leaders have repeatedly stated that the United States must act to enforce an “international norm” against the use of chemical weapons. This is the most frequent argument the administration makes for war, but it weakens its own case by calling for enforcement of international “norms” rather than international law. Syria has not signed the Chemical Weapons Convention (CWC), the 1993 treaty that prohibits the manufacture, stockpiling, and use of chemical weapons, and therefore cannot be charged with violating that agreement. However, it is a signatory to a much older treaty: the 1925 Geneva Protocol, which outlaws the use in war of chemical and biological weapons. This longstanding covenant—which the Allied powers and even Nazi Germany observed but Japan breached during World War II—is one of the oldest and most widely supported prohibitions against the use of weapons of mass destruction. A case could even be made that its ban on the use of chemical and biological weapons has attained the status of customary law, binding on all states whether or not they explicitly agree to it, which could not plausibly be claimed for the comparatively recent CWC. Nevertheless, while this instrument of international law clearly applies to Syria, the Obama administration barely mentions it, preferring to cite a political, social, or academic “norm” vague in both origin and application as its justification for a military strike. In so doing, the administration undermines international law by attempting to replace it with “norms” that it, and by implication any state, can proclaim or ignore at will. President Obama may find this convenient in the present crisis, but what would he say if, for example, Russia responds to a future crisis by invading Georgia to uphold another “international norm”?

Of course, laws that are not enforced might as well not exist. Clearly, the UN Security Council should take responsibility for applying the prohibition against chemical weapons use by passing a resolution authorizing “all necessary means” (i.e., military force) to enforce it. Just as clearly, it will not, because Russia and probably China would veto any such resolution. The Arab League, acting in its capacity to promote collective security, could also call for enforcement, but Saudi Arabia’s efforts to do just that have so far failed to break the stalemate that shields Syria from regional action. No US ally has called for help, no injured state has invoked its inherent right of self-defense, and the argument that the Bashar Assad regime’s use of Sarin in an internal conflict poses a direct threat to US security defies credibility. A resolution passed by Congress would protect President Obama from impeachment, as then-Senator Joe Biden threatened against President George W. Bush in 2007 with regard to a possible attack on Iran, but would have no international legal force. That leaves the Obama administration with no basis in international law for its planned military strike, as UN Secretary-General Ban Ki-Moon has noted. Individual and collective self-defense are valid justifications for war, but “sending a message” is not.

Still, the death and suffering of the victims of Syrian nerve gas attacks cries out for justice. What should the United States do? First, take the legal case for a military response to a more conducive venue. Launch a diplomatic offensive backed with economic and security incentives to pressure the Arab League to authorize military action. Second, develop other options short of direct military force that would seriously reduce Assad’s military and political capacity to fight and win his civil war. An arms embargo, which the European Union formerly imposed but allowed to expire, would not be airtight but could still have an impact. An energy embargo, asset seizures and other financial sanctions, and indictments by the International Criminal Court would not in themselves be decisive, but would weaken Assad’s hand and help turn the momentum of the conflict in favor of the Syrian National Coalition. Russia and Iran would undoubtedly try to undermine these efforts, but could not block them completely. Finally, providing more and better arms, training, and intelligence and logistical support to Syria’s non-Islamist rebels would strengthen both the opposition’s fighting force and ties to regional players with an interest in stability, such as Jordan. All of these options could receive at least tacit European Union and Arab League support if not direct authorization, creating a formidable coalition to punish the chemical criminals in the Assad regime.

“There have been times,” President Obama said in an April 2009 speech in Strasbourg, France, “where America has shown arrogance and been dismissive, even derisive.” Now, ironically, is one of those times, but it is not too late to change course. The United States should refrain from unilateral military action and work instead to orchestrate a multilateral and multipronged strategy to respond to the Assad regime’s heinous crimes . In addition to offering the best chance of success, this approach would send a clear message not only to Syria, but also to Iran, North Korea, and the entire international community that the Obama administration is willing and able to use every legal means to enforce international law prohibiting the use of chemical weapons.

Fred Wehling is a Fellow of the James Martin Center for Nonproliferation Studies at the Monterey Institute of International Studies.