From Prague to Berlin: The Decline of the US Nuclear Disarmament Agenda and Its Implications for the Middle East

As Barack Obama’s ambitious disarmament vision confronts political and strategic realities, his focus and determination seem to be shifting. 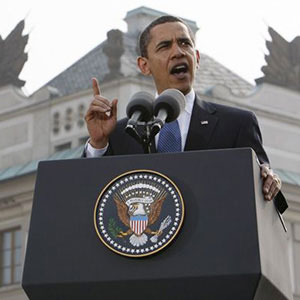 In early April 2009, newly elected President Barack Obama presented his objectives for nuclear disarmament during his first major foreign policy speech, delivered in Prague. Four years later—on June 19, 2013—Obama chose Berlin as the venue for delivering a revised and much curtailed version of that vision for his second term in office.

The enthusiasm of the Prague speech engendered hopes and expectations around the world for some major arms control developments. But after Obama’s “year of arms control” (mid-2009 to mid-2010) in which he managed to push forward several initiatives—with some degree of success—the topic receded in prominence on the presidential agenda for the remainder of his first term. The only challenge to which Obama devoted considerable attention in the 2010-12 period was one not normally included in the disarmament/arms control agenda, although it featured in the Prague speech: the challenge presented by determined proliferators Iran and North Korea.

With his speech in Berlin, Obama was perhaps seeking to reinvigorate the disarmament agenda for his second term, but a quick comparison of the major tenets of the two speeches reveals that the enthusiasm and energy to advance a broad arms control agenda so apparent in the earlier speech was starkly missing in the later one. Instead, Obama very briefly listed some goals for his second term. The most far-reaching related to further cuts in the US nuclear arsenal, with the president maintaining that America’s arsenal of deployed strategic nuclear weapons can be safely reduced by up to one third, and that this can be done while ensuring the security of the United States and its allies, and maintaining a “strong and stable nuclear deterrent.” He announced that the United States would host another nuclear security summit in 2016, and briefly mentioned that he would work to ratify the Comprehensive Nuclear-Test-Ban Treaty (CTBT) and to begin negotiating a Fissile Material Cutoff Treaty (FMCT). The contours of “the possible” in the realm of arms control had become more narrow and restricted.

On the same day as the Berlin speech, the Department of Defense released its “Report on the Nuclear Employment Strategy of the United States,” a document requested by Congress and formulated following a presidential directive ordering an analysis of nuclear deterrence requirements to ensure that US nuclear policy is suited to the current security environment. This document—which underscores the imperative of strategic stability as the guide for further reductions of global nuclear stockpiles—was the basis for the president’s message in Berlin regarding the extent of cuts that can be made. Significantly, while the document makes the case for further reductions in the US nuclear arsenal, it also notes the need to deter both Russia and China; deterrence is no longer limited to the bilateral US-Russian sphere.

When pondering the reasons for Obama’s revised and curtailed arms control agenda, immediate explanations go to domestic political constraints, particularly with regard to the ability of the president to push CTBT ratification through a deeply divided Senate, as well as the constraints arising from the strained nature of the US-Russian relationship, which the administration was unsuccessful in “resetting.” The ongoing tension over US and NATO plans for deploying ballistic missile defenses, as well as additional bilateral disagreements (including over Iran’s nuclear program) has precluded more far-reaching cooperation. In short, Obama discovered that he does not have a partner for his disarmament plans, both internally and on the global scene. And if the president is turning his thoughts to his legacy, he has most likely concluded that he cannot count on success when it comes to arms control and disarmament issues.

But it is interesting to highlight that the distance from Prague to Berlin was reflected in a parallel conceptual shift in the thinking of some of the prominent former officials who have become some of the most salient voices in the disarmament debate in the United States over the past six or seven years. Indeed, Obama’s original disarmament agenda drew on the thinking of four outstanding and longtime senior officials—Henry Kissinger, Sam Nunn, George Shultz, and William Perry—who in January 2007 first presented their ideas for a world free of nuclear weapons in a jointly authored op-ed published in the Wall Street Journal. In this op-ed, and in another published a year later, the four laid out the rationale for beginning a process of nuclear reductions, grounded in a very realist worldview: Russia was no longer the threat that the Soviet Union posed in the Cold War, and nuclear weapons arsenals in the post-Cold War world were even more dangerous because materials and know-how might find their way to the hands of terrorists. In an additional op-ed in 2011, these “four horsemen” pointed out that nuclear weapons today—in the hands of more countries—are no longer a source of stability, as was arguably the case in the Cold War, and might even end up being used.

In April 2012, Kissinger split from the other three and co-authored an op-ed with Brent Scowcroft, published in the Washington Post. This piece reflected a fear that US nuclear reductions might go too far, possibly undermining strategic stability rather than enhancing it. The authors sounded a warning bell that at the end of the day, what ensured strategic stability was still nuclear deterrence and that this deterrence must therefore continue to be robust while relating to additional states in a more complex deterrent equation. The risk that the United States might decide to move to what they considered dangerously low numbers in a manner that upset strategic stability assumed center stage for Kissinger and Scowcroft.

Overall, there was a noticeable shift in the trend that began in 2007 and 2008—with the op-eds that provided the “disarmament hook” that Obama latched on to when he entered the White House—to the Kissinger and Scowcroft op-ed of 2012 expressing a new concern regarding potentially dangerous nuclear reductions, especially those that did not take into account additional nuclear powers, and possibly weakened strategic stability. The theme of strategic stability is prominent in the DOD’s Nuclear Employment report as well, but as a platform for enabling further nuclear reductions. The agendas of the Obama administration and the prominent nongovernmental strategic thinkers are displaying some signs of divergence, another factor taking some of the wind out of Obama’s disarmament sails. Moreover, Russian foreign minister Sergei Lavrov reacted to Obama’s proposal to reduce stockpiles by up to one-third by arguing that future US-Russian nuclear reductions must take into account all nuclear weapon states, as well as US plans for missile defenses, which, according to Lavrov, will upset strategic balance between the United States and Russia. The notions of multipolar strategic stability and multipolar deterrence will no doubt assume center stage in arms control discussions in the years ahead.

What about the determined proliferators?

Turning to the nonproliferation front, namely the challenge posed by Iran and North Korea, the altered message and tone from Prague to Berlin is stark and disappointing. In Prague, President Obama devoted some time to laying out the dangers of these two proliferators. He emphasized, with regard to North Korea, that “rules must be binding. Violations must be punished. Words must mean something,” and with regard to Iran said, “Let me be clear: Iran’s nuclear and ballistic missile activity poses a real threat, not just to the United States, but to Iran’s neighbors and our allies.” In his December 2009 Nobel Peace Prize acceptance speech, Obama still had a message of determination regarding the flouting of international law by Iran and North Korea, and the security threats posed by such states that “arm themselves for nuclear war.” In Berlin, by contrast, he was content with literally only half a sentence devoted to the two states: “And we can forge a new international framework for peaceful nuclear power, and reject the nuclear weaponization that North Korea and Iran may be seeking.” To “reject” does not imply “to do everything possible, with all options on the table, in order to stop/prevent.” And to say that these states “may be seeking” nuclear weapons is a watered-down version of where these two proliferators are headed.

What might explain this altered stance regarding nonproliferation? After devoting much energy to these challenges—especially to Iran over the course of 2012—Obama has very little to show for his efforts. Therefore, one possibility is that he is receding from confronting challenges that he does not know how to bring to a successful resolution, as well as lowering expectations regarding his previous statements. That’s an ominous conclusion, but developments over the next months will provide important data for assessing the situation.

Moving to the Middle East

What are the possible implications of these developments and trends in the US disarmament debate for the Middle East region? In particular, how will a global move from a bipolar to a multipolar environment—with new messages and approaches regarding strategic deterrence and stability—affect arms control processes in the Middle East?

For more than two decades, the nuclear/weapons of mass destruction (WMD) agenda in the Middle East has been dominated by the unprecedented efforts of Egypt—with the support of Arab states and the blessing of states pushing proposals on this issue through the review process for the Treaty on the Non-Proliferation of Nuclear Weapons (NPT)—to move rapidly to establish a WMD-free zone in the region. This has been done although political conditions in the region have not been ripe for these efforts. The lack of political ripeness, together with the deep-seated mistrust among the parties concerning all essential components of an arms control and regional security process has been further exacerbated in the wake of the “Arab awakening.”

In the new regional security environment, the Middle East confronts a challenge similar (but by no means identical) to the one that the United States and Russia are facing: how to enhance strategic stability. In our case, the focus is on the regional level, which is inherently unstable and lacking even the minimal prerequisite of a regional forum for a security dialogue in order to address the multitude of “hard” as well as” soft” security issues which are a source of inherent instability. Should the current efforts by the UN Security Council’s P5+1 (the United States, Russia, United Kingdom, France, China, and Germany) fail to reverse Iran’s ongoing determination to acquire a nuclear weapons capability, which we still hope will not be the case, it would pose a formidable challenge to the already unstable environment, complicating the future of global arms control efforts, and more broadly undermining the entire NPT regime.

The questions with which the United States and Russia are currently grappling regarding the proper balance between nuclear arms reductions and robust nuclear deterrence as the essential underpinning of global stability are magnified ten-fold in the Middle East due to the acute instability, lack of trust, and absence of even minimal channels for advancing a regional security dialogue. The internal crises rocking key states such as Syria and Egypt mean that it may be years before we can address these issues at the regional level. The emerging new global arms control dynamics will also very likely influence external positions toward regional trends in new and currently unpredictable ways. The implications of injecting an Iranian nuclear capability into this critical environment are difficult to fathom.