After decades of trying, Turkey’s nuclear power program is getting underway. 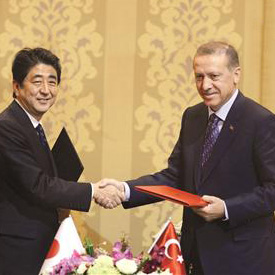 On May 3, Turkish Prime Minister Recep Tayyip Erdogan announced the selection of a Japanese-French consortium for exclusive bidding rights to build Turkey’s second nuclear power plant. Just three years ago, Turkey and Russia inked a deal for the construction of four VVER-1200 megawatt (MW) reactors at the Akkuyu site on Turkey’s Mediterranean Coast.

These recent successes come against a backdrop of Turkey’s long, tumultuous, yet tenacious nuclear history, which has been fraught with more disappointments than successes. Turkey has always argued that domestically produced nuclear energy is needed to decrease its reliance on unstable foreign energy suppliers. These nuclear power efforts have moved in parallel with its 1957 decision to host US tactical nuclear weapons, deployed under the aegis of the North Atlantic Treaty Organization (NATO) alliance.

While Ankara has embraced US-controlled nuclear weapons, no Turkish leader has ever sought to leverage its civilian facilities—at present, limited to just two research reactors—for nuclear weapon-related research. From the outset of Turkey’s nuclear era, beginning in 1956 with the establishment of the General Secretariat of Atomic Energy Commission (TAEC), the leadership opted to separate the agencies tasked with overseeing NATO nuclear weapons from those entrusted with nuclear energy-related research. (In 1982, the TAEC was restructured as the Turkish Atomic Energy Authority.) The current arrangement stems from Turkey’s unique political history, which has been marred by political instability and frequent military coups. Thus, in order to understand Turkey’s current nuclear policies, it is important to put the program in its historical context, dating back to the initial nuclear decision making in the 1950s and 1960s.

Turkey’s current nuclear program, like most developing countries, has its roots in the US Atoms for Peace program. When President Dwight D. Eisenhower announced the program in 1953, Turkey had recently transitioned from a centralized autocracy to a multi-party democracy. The transition allowed for the rise of a new political actor—the Democrat Party (DP) led by Adnan Menderes.

Shortly after the DP’s election, Turkey’s rapid industrialization began to tax the country’s meager energy resources, and by the mid-1950s, the import of foreign energy sources accounted for 57 percent of the visible current-account-deficit (CAD).[1] Turkey, therefore, was eager to explore atomic energy to ease its reliance on foreign imports and eagerly began to negotiate with the United States for a reactor following the Atoms for Peace announcement.

The United States and the Turkish Republic began negotiations for the supply of a small research reactor in 1954. The draft text was agreed upon in April 1955, and the two sides officially signed the world’s first Atoms for Peace nuclear cooperation agreement on June 10, 1955.[2] Shortly thereafter, Ankara established the TAEC, placed under the control of the prime ministry and tasked with overseeing the state’s early efforts to develop a civilian nuclear program. Turkey then chose the firm American Machine Foundry to construct a one-MW pool-type research reactor at the Cekmece Nuclear Research and Training Center outside of Istanbul. Construction began in 1959 and the reactor first went critical on January 6, 1962.[3]

Turkey’s early nuclear efforts, however, were beset with problems stemming from Ankara’s chaotic politics. Between 1961 and 1965, Turkey underwent a period of extreme political instability. The military, perturbed by Menderes’s politics and the handling of the economy, intervened and arrested the popular leader on May 27, 1960.[4] The military government returned the country to civilian rule seventeen months later. Turkish politics, however, remained fractured, and between October 1961 and October 1965, Turkey had a series of ineffectual coalition governments. Under the domain of the prime ministry, TAEC was greatly affected by the political upheaval and remained in a state of flux, until Turkey could put its political house back in order.

In October 1965, the Justice Party (JP), the political successor to Menderes’s outlawed Democrat Party, won 52.9 percent of the votes cast.[5] The return of a strong political party to power ushered in another era of short-term economic growth. Just one year later, TAEC established a second nuclear research center on the outskirts of Ankara, the Ankara Nuclear Research and Training Center, tasked with conducting the state’s first studies for the exploitation of domestic uranium reserves for the eventual use in a pressurized heavy water nuclear power plant. Turkey had hoped to build a small heavy water reactor to begin producing power by 1977.

Turkey’s ambitious plans, however, were once again undermined by political instability and economic collapse. By the end of the 1960s, the Turkish economy suffered from high levels of inflation and external debt, impeding the government from securing vital foreign credit. In tandem, Turkey began to experience a period of extreme political polarization. Disgruntled liberals, egged on by Turkey’s dire economic circumstances, formed a rash of ultra-leftist political parties. The religious right, intent on carving out a greater space for religious expression in ultra-secular Turkey, gravitated towards Islamist parties. Other groups, angry at the United States for failing to support Turkey’s threats to intervene in Cyprus in 1964, formed ultra-nationalist parties. These three factions eventually turned on each other, filling Turkish streets with violence.

Subsumed by these issues, the government had little time or money to fully implement its nuclear ambitions. The military, troubled by the JP’s handling of the economy and the rising violence in the streets, intervened again and overthrew the JP leadership on March 12, 1971. Later that decade, Turkey would again look into nuclear power, but another military coup in 1980 derailed negotiations with two Swedish firms.

Despite the polarization of Turkish society and the widespread disappointment with the lack of US support for its military operation in Cyprus, Ankara remained comfortable with the NATO nuclear guarantee. Turkey eagerly received US nuclear gravity bombs and dual-capable US aircraft at its NATO air bases in 1957, followed by an equally eagerly negotiated bilateral basing agreement with the United States for medium-range Jupiter ballistic missiles on September 16, 1959.[6]

Despite a number of disagreements with the United States during the Cold War, Ankara valued nuclear weapons for deterrence and continues to maintain that nuclear weapons constrained Soviet expansionism. After the Soviet Union collapsed, shifting the threats from the Warsaw Pact to the Middle East, Turkey applied the Cold War lessons to states like Syria, Iraq, and Iran. In turn, the Cold War-era thinking about nuclear weapons remains pervasive in Turkish strategic thinking, even though the threat of an all-out nuclear war has subsided.

While Turkish politics remained fractured during the 1950s and 1960s, the dominant political parties, as well as the military leadership, all agreed on the need for Turkey to defend itself from Soviet aggression. As Soviet nuclear capabilities increased, Ankara continued to rely on NATO—and therefore US—nuclear guarantees for its ultimate security. Thus, the nuclear weapons bureaucracy was shielded from political upheaval largely because every group supported their deployment. This pervasive belief in nuclear weapons stands in stark contrast to the attention given to the early nuclear power efforts.

Moreover, despite the recent efforts to carve out a more independent foreign policy, the AKP has not made any significant changes to Turkey’s nuclear weapons policy. While Ankara certainly has embraced the idea of increasing reliance on conventional precision munitions for military missions previously assigned to nuclear weapons, its actions nevertheless suggest that the Turkish leadership continues to assign value to nuclear weapons to deter the use of weapons of mass destruction. Turkey therefore appears set on continuing the policies that it first articulated in the 1950s and 1960s, albeit with a more sober appraisal of the scenarios for nuclear weapons use.

These weapon-related efforts remain completely divorced from Turkey’s quest to develop nuclear energy. However, the separation of Turkey’s security planning from its civilian energy planning underscores the way the two issues are regarded in Ankara. Its reactor efforts remain, as always, within the realm of power generation, and thus under the prime ministry. The security issues continue to be dictated, to a large extent, by the military, ensuring the continued separation of nuclear weapon plans from civilian power plans.

Aaron Stein is a doctoral candidate at King’s College, London and a researcher specializing in proliferation in the Middle East at the Istanbul-based Center for Economics and Foreign Policy Studies. He blogs at Turkey Wonk. You can follow him on Twitter @aaronstein1.