Look, Up in the Sky!

A crash course on why meteorites can be as powerful nuclear weapons, whether they can be shot down, and how a global nuclear testing detection network helps us to better understand them. 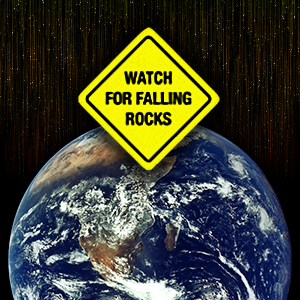 In a bizarre cosmic coincidence last Friday, a meteorite exploded over the formerly closed Russian city of Chelyabinsk hours before a larger (unrelated) asteroid, 2012 DA14, came within an astronomical hair’s breadth of hitting Earth. The latter asteroid threaded its way between our geostationary communication satellites and the Earth before being deflected away by gravity: a close cosmic shave (see the figure below)!

Although we had been alerted for some time to the asteroid’s imminent flyby, the exploding meteorite caught everyone by surprise. The shockwaves resulting from its fiery explosion over Russia shattered glass windows, dishes, and televisions, and injured more than a thousand people.

Figure showing the trajectory of the Chelyabinsk meteor and the 2012 DA14 asteroid. A comparison of their approximate relative sizes is also given in the box on the lower right. (Source: Adapted by the author from the London Daily Telegraph)

Unfortunately, the meteor was one of those space rocks small enough to escape prior detection but still large enough to cause damage and injury. About 10,000 larger “near-earth objects” are known and cataloged, but many smaller rocks remain below the detection threshold of current instruments. We are quite lucky that the damage from the Chelyabinsk meteorite explosion was not much worse; had it exploded closer to the ground over a populated area, very serious damage and fatalities would have occurred.

Reports of the event are still coming in so any parameters given here should be treated as preliminary and subject to revision as more data become available. For example, some Russian scientists have substantially lower estimates of the blast magnitude. The physical parameters of the meteorite, as derived from infrasound data (see below), indicate that the mass of the meteor was about 10,000 metric tons (that’s 10 million kilograms) and that it was about seventeen meters across (assuming a spherical diameter and a chondritic or stony density of 3,600 kilograms per cubic meter). We don’t really know the true shape of the object prior to its entry into our atmosphere, but we do know it was roughly the size of a large 18-wheeled truck. (These early numbers are approximate and may well be off by a factor of two.) Such a rock is thought to impact Earth about once a century.

How are these numbers determined?

The parameters of the meteor are derived from low-frequency infrasound measurements made by sensors maintained by the Comprehensive Nuclear-Test-Ban Treaty Organization (CTBTO) and normally used to monitor for nuclear explosions. These sound frequencies are below the range of the human hearing (from 20 Hertz down to 0.001 Hertz), and they travel enormous distances with very little attenuation. The shockwaves generated when a meteor travels through the atmosphere and then explodes produce infrasound signatures that can be used to reconstruct the energy of the explosion. In this case, the best estimate (from Peter Brown of the University of Western Ontario) is 470 kilotons (i.e., the equivalent of 470,000 tons of conventional high explosives).

Seventeen infrasound stations in the CTBTO’s network detected the infrasonic waves from the meteorite that broke up over Russia’s Ural Mountains. (Source: CTBTO)

Do we know at what altitude the main explosion occurred?

Not precisely, but based on previous events experts currently estimate about 20-30 kilometers above the Earth’s surface. This may be revised as more data come in.

How fast was the meteorite going, and what caused it to explode?

The meteorite was traveling 18 kilometers per second or (about 40,000 miles per hour). That’s about forty times faster than a bullet and roughly three times faster than an intercontinental ballistic missile. At those speeds, when a meteorite encounters even the rarefied atmosphere at approximately 20-30 kilometers altitude, the atmosphere acts on it like a hammer blow (due to the air’s ram pressure) shattering the meteor. Another way to think about it is to imagine that the leading edge of the meteor is violently retarded by the atmosphere even as the “back” end of the meteor continues forward until it smashes or “pancakes” into the much slower leading edge. The explosion occurs when the air ram pressure exceeds the structural strength of the meteorite. Think of belly flopping into the sea from a 200-foot cliff: water is normally soft, but at high relative speed it exerts a lot of pressure. A similar effect happens with rarefied air at high altitudes, at meteoric speed. So when the air ram pressure exceeds the structural strength of the meteorite, it undergoes a sudden and violent fragmentation and disintegrates due to heat and shock. The resulting debris may be in the form of fine powder or fragments that may then continue to ablate and/or fall to the surface. The outgoing shockwave produced in such an “explosion” is often referred to as an ablational shock. This is likely what caused much of the damage seen in Chelyabinsk.

Did any satellites “see” the meteor directly?

The SEVIRI (Spinning Enhanced Visible and InfraRed Imager) instrument aboard the Meteosat-10 geostationary satellite picked up the vapor trail of the meteor/meteorite. US military satellites that continuously monitor large portions of the globe—and in particular Russia—for ballistic missile launches surely have more data but, so far, these data remain classified. It would be useful and scientifically valuable for the military to declassify the relevant data, or at least provide some parameters derived from its own analysis of the data. According to Russian nuclear expert Pavel Podvig, Russia’s early warning radars missed the meteor. Although they could have seen it, the radars were not “looking” in the right direction because there was no warning of the event and because they are not intended to detect meteors.

Does the 470 kiloton explosion mean it was just like a 470 kiloton nuclear bomb? Is there similar radioactive fallout? If the source of energy is not nuclear, what is it?

Although the meteorite explosion was as powerful as a 470 kiloton nuclear bomb going off at an altitude of 20-30 kilometers, it was not the same as a nuclear bomb because it did not result from a nuclear chain reaction. There is no possibility of radioactive fallout. But there are similarities: like a meteoric explosion, a nuclear explosion also occurs extremely rapidly and over a relatively small amount of space. The source of energy for a meteorite explosion is the kinetic energy of the object: 10,000,000 kilograms moving at 18 kilometers per second. This is rapidly converted to heat and mechanical energy (and some very minor residual kinetic energy of any fragments) during the ablational shock mentioned above. Normally a 470 kiloton nuclear device would cause much more damage because it would detonate at a significantly lower altitude. We were fortunate that the meteorite did not descend further into the atmosphere before disintegrating; otherwise the damage may have been much worse.

Could a missile defense system protect us from such a meteor?

No. Meteors travel much too fast and, more importantly, an impact from a missile defense interceptor would have little if any effect during the last few seconds of a meteor’s flight and essentially no effect on its speed or trajectory.

However, if there is a warning months or years in advance that an asteroid or meteoroid is on a collision course with Earth, then it would be possible to use various methods to either violently or gently nudge the object away before it got close to Earth. However, such ideas are only being studied right now—they are not yet operational. A 2010 National Academy of Sciences study, “Defending Planet Earth,” proposed studying the options for better monitoring and protecting the earth from near-Earth objects.

Is there a concern that such meteorite explosions of hundreds of kilotons or more could be mistaken for a nuclear weapon and touch off a nuclear war?

As last week’s event demonstrated, that is unlikely. In an actual nuclear attack—at least one involving the United States or Russia—infrared-detecting satellites would spot the hot rocket plume of a ballistic missile shortly after launch, identifying its point of origin and triggering a military alert and possible retaliatory measures. A “bolt-from-the-blue” meteorite explosion with no corresponding rocket launch plume would not set off the same kind of alerts from early warning systems. However, in times of tension—say if there were a tense standoff with China—and for particular locations and impact geometries that leave no characteristic vapor trail (e.g. straight down), and especially if the damage was significant—it is possible that such an explosion might be initially confused with a nuclear detonation. In fact, about a decade ago, the deputy director for operations of the US Strategic Command stated that if such an explosion had happened over South Asia during a period of high tension between India and Pakistan, it could have been misinterpreted as a nuclear explosion and sparked a nuclear war. However, this is a speculative concern.

Interestingly, Chelyabinsk is home to several nuclear weapons production and storage facilities, yet there appears to have been no panic within the Russian national security apparatus. As Hans Kristensen of the Federation of American Scientists points out:

Impact sites still have to be found but one reportedly was Chebarkul Lake, some 72 kilometers (45 miles) southwest of the city of Chelyabinsk. Another piece impacted near the town of Zlatoust some 80 kilometers (49 miles) to the northwest.

Right in the meteor’s path, approximately 115 kilometers (72 miles) southwest of Chebarkul Lake, is Zlatoust-36, one of the two main warhead assembly and disassembly facilities in Russia. Adjacent to the facility is a national-level nuclear weapons storage site.

It remains to be seen whether any of the facilities sustained any damage.

How often should we expect such an event to take place?

Given the large size of the meteor, it is expected that we would see something similar only about once a century. The estimated frequency of various impact events is given here.

Is it possible to calculate the effects of different types of meteors entering Earth’s atmosphere?

Doing so from scratch is difficult even for experts, but Purdue University has developed a useful online tool that allows one to control multiple parameters to explore the possible effects.

Yousaf Butt is a research professor and scientist-in-residence at the James Martin Center for Nonproliferation Studies at the Monterey Institute for International Studies.