The Promise and Peril of Thorium

It’s time to evaluate claims that thorium-fueled reactors can reduce the proliferation risks of nuclear energy. 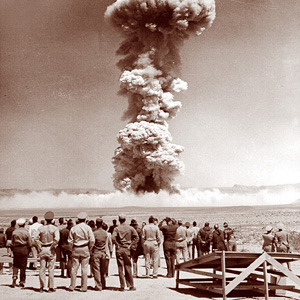 Update: An earlier version of this article misstated the half-life of protactinium-233.

Thorium, the “other” nuclear fuel, could be the basis of an entirely new nuclear industry that is clean, green, low-cost, and intrinsically resistant to the production of nuclear weapons. Such is the bold claim made by many of thorium’s committed band of advocates.[1]

The technology favored by thorium advocates differs from the current mainstream technology in two ways. First, it uses a thorium-uranium fuel cycle, instead of the dominant uranium-plutonium fuel cycle. Second, it uses the molten salt reactor (MSR) design, in which the nuclear fuel takes the form of high temperature (hence, molten) fluoride salts. Put the two together and you have the LFTR (Liquid Fluoride Thorium Reactor).

The MSR/LFTR technology was developed from the 1950s to the 1970s, mainly at the Oak Ridge National Laboratory in Tennessee. It all began under the Aircraft Nuclear Propulsion program, which sought to create a reactor suitable for powering US strategic bombers, enabling the aircraft to remain aloft for days or weeks at a time. Although the program was canceled in 1961 and no aircraft ever flew under nuclear power, the technology progressed under two subsequent programs, the MSRE (Molten Salt Reactor Experiment) and the MSBR (Molten Salt Breeder Reactor), until funding ceased in 1976.

At that time, the United States—and the rest of the world—decided to pursue exclusively the now dominant nuclear technologies: the uranium-plutonium fuel cycle and solid fuel reactor designs. These were chosen, say thorium advocates, because of their ability to produce plutonium for nuclear weapons, while MSR/LFTR designs were abandoned because they could not produce plutonium, and so failed to support the production of nuclear weapons.[2]

But following my own examination of the technology, I am forced to the very opposite conclusion: LFTRs could be used as highly efficient factories for very pure fissile material eminently suitable for bomb making. Furthermore, it is my belief—based on the facts set out here—that funding may have been cut because the widespread deployment of LFTRs would create an enormous proliferation hazard that is contrary to the US national interest.

Key to this argument is that fact that it is really quite difficult to produce the fissile material for a nuclear bomb using established technologies. The first approach is to extract and enrich fissionable uranium-235 from natural uranium (converted to uranium hexafluoride) by way of cascades of centrifuges. The process requires significant amounts of energy and sophisticated technology, and amounts to a major industrial operation that is difficult to conceal.

The second approach is no less challenging, as it involves the “breeding” of fissionable plutonium-239 in uranium-fueled nuclear reactors, followed by the chemical separation of the plutonium that is formed in the fuel.

Adding to the difficulty, it is desirable to keep levels of the non-fissile isotope plutonium-240 (Pu-240) very low (under seven percent), since larger amounts increase radiation exposure rates for personnel assembling or handling nuclear weapons and can cause nuclear bombs to detonate prematurely, producing a lower than expected explosive yield or “fizzle.” Further, to achieve suitably low levels of Pu-240, reactors must run for a period of only weeks before the fuel is removed and reprocessed and the plutonium extracted—something that makes no sense at all where energy production is the objective.

The considerable difficulties involved in producing weapon-grade uranium and plutonium, and the relative ease with which efforts to that end may be detected, has effectively limited the “nuclear club” to a small number of nations, and has entirely excluded non-state actors. In general, a nuclear weapon state’s interest is to make it as hard as possible for others to join the club. If a technology were to emerge that would make the production of weapon-grade fissile material relatively inexpensive, easy, and yet difficult to detect, the United States would have good reason to suppress it.

But first, we need to understand how the LFTR works. It uses natural thorium-232 as its fuel. While thorium is not fissionable, it is fertile: irradiated by neutrons, it transmutes into a highly radioactive isotope, protactinium-233 (Pa-233), which in turn decays into the fissionable isotope uranium-233 (U-233), which constitutes the fuel.

U-233 is able to sustain a nuclear fission chain reaction just as U-235 does in a conventional reactor. The main difference is that some of the neutrons produced by the U-233 fission transmute the natural thorium into new U-233, thus maintaining the supply of uranium; indeed, it is key to the LFTR design that the U-233 is produced faster than it is consumed by fission. And of course, the whole process needs to be kicked off with neutrons from existing fissile material, for example U-235, Pu-239, or U-233.

This thorium fuel cycle can be carried out in a conventional solid fuel reactor, and indeed India is proposing to do precisely this in its forthcoming advanced heavy water reactors (construction of which will reportedly commence in 2014), intending to employ a fuel that includes thorium in addition to uranium and plutonium. But the fuel in any solid fuel reactor needs to be removed and reprocessed long before it is truly burnt up and no longer of use, otherwise some of these fissionable byproducts act as “neutron sinks,” degrading the “neutron economy”—the efficiency of the reactor—until the nuclear chain reaction grinds to a halt, or becomes difficult or impossible to restart once stopped.

This problem is solved in an MSR/LFTR by continuously reprocessing the molten salt fuel on-site, removing undesirable fission products. These include neutron sinks like xenon-135 and samarium-149, but also chemical contaminants like sulfur and oxygen, which can precipitate metal oxides from the molten salt. In this way, a batch of fuel can remain in a reactor for a considerable time, allowing a far more complete burn-up than could ever be supported in a conventional solid fuel reactor.

It is also desirable to remove the Pa-233 from the fuel in order to prevent the neutron bombardment from transmuting it into Pa-234. This is unwanted for three reasons: first, transmutation reduces the yield of U-233; secondly, it absorbs neutrons (reducing U-233 production); third, the Pa-234 decay produces uranium-232, whose decay series ends with the decay of the isotope thallium-208 (Tl-208), which emits an ultra-hard gamma ray with an energy of 2.6 million electron volts—enough to penetrate over a meter of concrete and damage electronics and control systems.

This process was successfully carried out at Oak Ridge, where scientists developed means to remove the Pa-233 very efficiently using simple chemical reactions, even when the protactinium is present at the very low levels of 100 parts per trillion.[3] Once removed, the Pa-233 can simply be left aside until it decays into U-233. With a half-life of twenty-seven days, over 99.9 percent of the Pa-233 transmutes to U-233 over a period of about nine months. This U-233 can then be fed back into the reactor—or diverted in all or in part for another purpose, including bomb making.

To summarize, the protactinium removal has two important advantages for would-be bomb makers: very high purity U-233 is produced; and the U-233 contains very low levels of the undesirable U-232, whose daughter Tl-208 emits ultra-hard gamma rays capable of harming the health of handlers and machinists, damaging control electronics, and which can be detected by air- and even space-based sensors.

The world has but one experience of using U-233 in nuclear bombs. In 1955, the United States detonated a composite U-233/plutonium bomb in the Nevada desert as part of the Operation TEAPOT nuclear test series. The device detonated successfully, albeit with a lower than anticipated yield. With over half a century of nuclear weapons technology advances since then, there’s little doubt that U-233 bombs could be made highly viable, especially given the very high purities achievable, at least in principle, using LFTR technology with protactinium removal.

However, four major challenges complicate efforts to get LFTRs operational on a production scale:

Those embarking on any LFTR program would presumably hope and expect that these problems are ultimately soluble. It is also possible that a country—or countries—might initiate an LFTR program with a principal objective of producing a surplus of U-233 for making nuclear weapons, in which case the above considerations are likely to diminish in importance.

It is, of course, possible to build an LFTR without protactinium removal equipment; the resulting U-233 would be heavily contaminated with U-232, making it far from ideal bomb-making material. But protactinium removal could always be bolted on at a later stage, and the equipment itself concealed from nuclear inspectors, or its actual purpose obfuscated. Bearing in mind the intense radiation to which the on-site reprocessing equipment would be subject, and the high temperatures of 600 degrees centigrade or more, inspections would need to be conducted entirely using remote access/robotic methods, making accurate determination difficult.

But the key point here is that neither thorium, nor the LFTR, nor the uranium it produces, are intrinsically resistant to facilitating the proliferation of nuclear weapons. If LFTR designs are ultimately proven and become widespread, the selection of LFTRs as a means of producing fissile material would be an entirely rational choice for states either wishing to acquire nuclear weapons capabilities, or to increase their stock of nuclear weapons at much lower cost, and with much lower risk of detection, than using conventional technologies. As such, the technology itself would not prevent nuclear proliferation. That would only be possible with a frequent and rigorous inspection regime.

Oliver Tickell is an author, journalist, and campaigner specializing in environment, energy, and health issues. He is based in Oxford, England.