From Dyad to Triad: What India’s Nuclear Developments Mean for Pakistan

How will Pakistan respond to India’s deployment of nuclear-armed submarines? 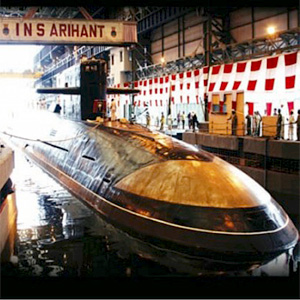 With the induction of the nuclear-powered ballistic missile submarine (SSBN) INS Arihant scheduled for the first half of 2013, and with plans to add at least three more indigenously-built SSBNs to India’s naval forces by 2025, New Delhi is poised to begin a gradual strategic shift toward the Indian Ocean.[1] The formal induction of the Arihant is a powerful first step towards establishing a sea-based nuclear deterrent, whereby the Indian armed forces—currently able to deliver nuclear weapons via fighter aircraft and surface-to-surface missiles—will add the capability of firing submarine-launched ballistic and cruise missiles.

Such an arrangement will go a long way towards reinforcing India’s already robust second-strike capability, and places it in a small group of states with maritime nuclear forces. It may take a full decade, and the acquisition of at least three or four more submarines, until India has a true operational maritime nuclear capability, but this is clearly a new strategic direction.

Ultimately, and most importantly for regional stability, the completion of India’s maritime deterrent skews the India-Pakistan nuclear competition in favor of India. But how, specifically, will the deployment of Arihant, and India’s future fleet of nuclear-capable submarines, impact Pakistan’s strategic calculus in both short- and long-term planning?

In the immediate future, Pakistan will have to act fast to counter the strategic advantages India will gain with the induction of the Arihant and other SSBNs. Pakistan has been working to integrate the French-built Khalid-class submarines into its strategic forces for several years, but significant hurdles remain. Specifically, missile tubes have to be modified to handle nuclear-capable missiles like the Babur cruise missile, and the navy needs to be integrated into the country’s existing nuclear command and control architecture, which is currently dominated by the army.

While India will be able to deploy nuclear-propelled submarines over the next few decades, no credible evidence suggests Pakistan has made plans to do the same. Instead, naval planners have focused on acquiring more sophisticated conventional submarines, like the recently announced purchase of six submarines from China with modern air-induced propulsion systems.[2] Pakistan’s focus on conventional submarines underscores the country’s financial constraints when it comes to military procurement, especially for the historically overlooked Pakistani Navy.

Once deployed, the Arihant and future Indian SSBNs will increase India’s strategic depth—something that Pakistan currently lacks, vis-à-vis its eastern neighbor. Virtually undetectable and able to stay underwater for months at a time, nuclear submarines are nearly invulnerable to even the most modern anti-submarine warfare technology and offer a qualitative advantage to a country’s nuclear deterrent. Sea-based delivery platforms reinforce a country’s ability to retaliate after absorbing a nuclear first strike, and likely dissuade an adversary from attempting a dangerous preemptive attack against its nuclear assets. Assuming a survivable command, control, and communications network, the future fleet of Indian SSBNs will add depth to the country’s nuclear deterrent.

India’s nascent nuclear monopoly in the Indian Ocean is likely to force officials in Pakistan’s National Command Authority to temper their recently emboldened outlook toward nuclear doctrine and strategy. Recent missile developments suggest at least some officials in the Strategic Plans Division (SPD) believe its forces can use nuclear weapons without necessarily evoking a nuclear response from Delhi. In particular, Pakistan’s recent addition of nuclear-capable, tactical ballistic missiles like the Nasr signal Islamabad’s confidence that a counterforce nuclear strike—say, against Indian troops who had crossed the international border as part of India’s conventional “Cold Start” doctrine, which envisions limited, punish-and-withdrawal operations against targets inside Pakistan—would not escalate to higher levels of retaliation. This logic hinges on the assumption that a defensive nuclear attack against foreign troops on its own soil would be protected by international law, thereby profoundly complicating India’s decision to respond with a nuclear strike of its own. While such thinking would have been risky before, India’s nuclear submarines, equipped with nuclear-capable missiles, render such logic even more dubious.

How Pakistan Can Respond

In the medium- to long-term, Pakistan will feel forced to counter India’s SSBNs in order to reestablish strategic balance in the Indian Ocean. Pakistan can choose to respond to India’s sea-based deterrent in a number of possible ways. First, Pakistan can acquire SSBNs from friendly countries, or build them indigenously. China, an historical ally with decades of experience in maritime nuclear technology, would be a likely partner in any Pakistani effort to acquire nuclear submarines. Although such cooperation would be deeply unsettling in New Delhi and Washington, and China’s own struggles operationalizing SSBNs represent a significant hurdle, Beijing would welcome the opportunity to reinforce Pakistan’s deterrent posture, while also increasing its own strategic presence on India’s western flank. Considering the desperate state of the Pakistani economy, however, cost constraints appear to rule out this possibility, and most certainly preclude an indigenous program in the foreseeable future.

The most likely Pakistani response, and the policy option it seems poised to pursue, is to equip newly purchased conventional submarines with nuclear-capable cruise and ballistic missiles. In addition to the aforementioned purchase of six Chinese submarines, reports indicate that Pakistan has been in talks with Germany for several years over the acquisition of three nuclear-capable submarines.[3] In this way, Pakistan would follow the same trajectory as Israel, whose German-built, Dolphin-class submarines are an integral dimension of its strategic force posture.[4]

At the same time, Pakistan continues to develop its missile program, particularly in the field of cruise missiles. In the last year, Pakistan twice tested its newest cruise missile—the Babur—which it is also reconfiguring to have submarine-launch capabilities.[5] With a range of 750 kilometers, the Babur could evade India’s nascent missile defense systems, and would signal a significant step forward in the sophistication of Pakistan’s delivery systems.

Pakistan may be able to reestablish strategic equilibrium vis-à-vis India by acquiring a new fleet of conventional submarines, but this would take time. While conventional submarines lack the prestigious cachet of SSBNs and their ability to remain submerged for extended periods of time, they are much less expensive to build and maintain than their nuclear-powered counterparts. Islamabad will first need to make tough choices about its force posture, delivery systems, and the financial price it is willing to pay to narrow the strategic gap it will have with India on the high seas. How Pakistan responds to the forthcoming induction of India’s strategic submarines over the next decade will have repercussions for both regional and international security.

Shane A. Mason is a graduate research assistant at the James Martin Center for Nonproliferation Studies, Monterey Institute of International Studies.