Asian states must take greater responsibility for increasing the security of nuclear materials and facilities in order to reduce the risk of nuclear terrorism. 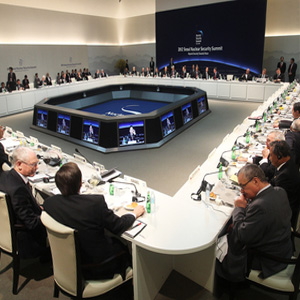 South Korean President Lee Myung-bak speaks during
a working luncheon at the Nuclear Security Summit in
the Convention and Exhibition Center in southern Seoul
on March 27, 2012. (Yonhap)

On June 13, the Asia Pacific Leadership Network for Nuclear Non-Proliferation and Disarmament (APLN) released a statement urging Asia to get serious about nuclear security. The group—which includes regional heavyweight experts in the disarmament and nonproliferation field, such as former Australian Foreign Minister Gareth Evans, former Japanese Foreign Minister Yoriko Kawaguchi, and former UN Under-Secretary for Disarmament Jayantha Dhanapala—based its statement on four pillars: the universalization of existing nuclear treaties; the establishment of legally binding nuclear security mechanisms; the creation of mechanisms for transparency, reporting, and accountability; and a bolstered role for the International Atomic Energy Agency (IAEA) in nuclear security.[1]

Nowhere is the security of nuclear materials more important than Asia. The continent possesses three countries with well-established nuclear weapon programs (China, India, and Pakistan) and another with a latent ability (North Korea). Asia is also the only continent to have experienced the use of nuclear weapons in wartime (Hiroshima and Nagasaki, Japan). Moreover, more than 100 nuclear reactors across Asia serve as a significant source of energy, especially in Japan and South Korea.[2] For all these reasons, Asia needs to advance beyond discussions and toward concrete action on strengthening nuclear security.

The APLN’s first policy prescription is to ratify existing treaties related to nuclear security, namely the 1980 Convention on the Physical Protection of Nuclear Materials (CPPNM), including its 2005 amendment, and the 2005 International Convention for the Suppression of Acts of Nuclear Terrorism (Nuclear Terrorism Convention). Nearly twenty states in the Asia-Pacific region have not yet ratified the CPPNM, including countries that possess or desire civil nuclear programs such as Vietnam, Thailand, and Malaysia. Of even greater concern is the fact that North Korea—which has a nuclear weapon program—has not signed onto the treaty.

There are more than a dozen additional countries that are party to the CPPNM, but have not yet ratified the 2005 amendment including Japan, South Korea, Bangladesh, and New Zealand. According to the IAEA, the amendment to the CPPNM makes it “legally binding for States Parties to protect nuclear facilities and material in peaceful domestic use, storage and transport. It also provides for expanded cooperation between and among States regarding rapid measures to locate and recover stolen or smuggled nuclear material, mitigate any radiological consequences of sabotage, and prevent and combat related offences.”[3] Without ratification by at least two-thirds of original state parties, the amendment cannot enter into force.

The Nuclear Terrorism Convention details offenses relating to the illicit possession and use of radioactive material or a radioactive device, and the use or damage of nuclear facilities. The convention is designed to promote cooperation among countries through sharing information and providing assistance for investigations and extraditions. This pact on nuclear terrorism is extremely important to address one of the gravest threats to international security. Unfortunately, several critical states in Asia have not signed onto the treaty, including Pakistan, North Korea, and Myanmar. This is a significant concern because the convention, which entered into force in 2007, requires “States Parties to make every effort to adopt appropriate measures to ensure the protection of radioactive material, taking into account relevant recommendations and functions of the [IAEA].”[4] Pakistan and North Korea are states possessing significant nuclear materials that have demonstrated an inability and/or lack of motivation to provide adequate physical protection.

The second recommendation of the APLN statement is to adopt binding nuclear security standards beyond the current non-binding frameworks in place through the CPPNM and the IAEA. This is perhaps the most significant recommendation but also the most difficult to accomplish. Considerable questions arise: how can universal nuclear security standards be adequately implemented in a region where the line between civilian nuclear power generation and military establishments is often blurred, forming a roadblock to adequate verification? Which organization would be tasked with monitoring and verifying the new regulations? While the IAEA appears to be the logical choice given its knowledge base and relevant functions, achieving consensus among all states in the region to increase the IAEA’s role remains problematic.

This point leads to the final two recommendations: create a mechanism for transparency, reporting, and monitoring; and bolster the IAEA’s role in ensuring nuclear security. This latter recommendation is the most imperative and will have a trickle-down effect on the other APLN recommendations. A recent study by nuclear security expert Trevor Findlay, “Unleashing the Atomic Watchdog: Strengthening and Reform of the IAEA,” emphasizes this point: “Nuclear security tasks accorded to the Agency by member states, although growing, tend to be modest and supportive of external efforts: the Secretariat needs to rapidly equip itself for this new area of work and member states need to resource this activity properly….”[5] Findlay succinctly encompasses the IAEA’s importance by labeling the agency a “veritable bargain for international peace and security.”[6]

The IAEA’s increased role in nuclear security will undoubtedly require more resources from member states. However, as noted earlier, several Asian countries remain skeptical about allowing the IAEA to “intrude” on their sovereignty and inspect installations connected to their most sensitive programs. Unfortunately, there is a still the specious notion in some states that the agency narrowly serves the agenda of United States and is another arm of Western intelligence agencies. In many respects, the IAEA will also need to break new ground on institutionalizing nuclear security because it is an area that has—until now—been housed under a number of different international organizations, processes, and summits.

This past March, the second Nuclear Security Summit was held in Seoul, South Korea, to be followed by a third summit in the Netherlands in 2014. The summits continue to be vital in raising the profile of nuclear security globally and working concretely towards President Barack Obama’s goal of securing all vulnerable nuclear materials around the world. Despite its critics, the summit process has significantly raised awareness at the highest levels of government and has demonstrably improved the physical security of nuclear materials. The summit in Seoul also bolstered Asia’s role in nuclear security and demonstrated that the region can no longer approach the issue myopically.

It is critical for the Asia-Pacific region to heed the outcomes and policy direction of the summit process, and to work toward strengthening the role of the IAEA in this field. The “Asian Century” is indeed upon us, but with increased influence comes increased obligation.

J. Berkshire Miller is a security analyst on the Asia-Pacific region for The Diplomat, based in Tokyo.