The Arab Awakening and Regional Security

How will the unprecedented political changes sweeping through the Arab world affect states’ regional and international security policies? 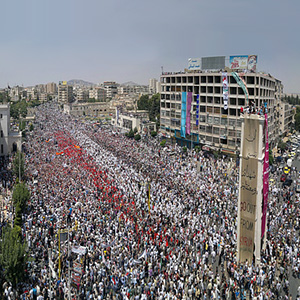 The last eighteen months have seen the four longest serving Arab leaders in Tunisia, Libya, Egypt, and Yemen exit the political scene after almost 150 collective years in power. Even more striking is that the winds of change continue to blow—albeit with variable strength and results—throughout the entire Arab world, from Morocco on the Atlantic Ocean to Oman on the Arabian Sea.

Today, with so many variables in flux, it remains much too early to judge the exact consequence of these historic events, even in countries where regimes have already been toppled. The significance of these developments for political orientation, international security, and the evolving nature of emerging domestic political systems will continue to mature as local constituencies assert themselves and become policy stakeholders. These constituencies will no longer lie dormant. Instead, it is self-evident that they will increasingly seek to play a part in the management of foreign affairs, including policies on regional and international security issues. Yet, domestic issues will continue to dominate the conversation in the short term as these Arab states struggle with the challenges of political transition.

In fact, foreign policy issues have driven none of the changes to date. However, as time passes, issues of external significance will take on ever greater importance in domestic debates, a phenomenon that may well be hastened or exaggerated by tensions in Israel-Palestine, the escalating violence in Syria, and the continuing debate over Iran’s nuclear activities.

As events in the Middle East unfold, there will be much to fuel these debates. The strategic vacuum left by volatility in the region may well tempt non-Arab regional players such as Israel, Iran, or even Turkey to seek to expand their regional influence. Iran in particular has already shown increased assertiveness through high-level visits to the islands of Tomb al Kobra and Tomb al Soghra (known in the west as the Greater and Lesser Tunbs), which the United Arab Emirates considers its own. For its part, Israel may seek to preempt any potentially ambitious attempt by a second-term Obama administration to reactivate the peace process or counter the threat of Palestinian reconciliation by enacting its own unilateral measures in the occupied West Bank. And there remains a very real possibility that ongoing nuclear talks with Iran will fail, or that the world’s distraction with the U.S. presidential election could entice Israel to engage in military strikes on Iranian nuclear facilities. Any and all of these scenarios could easily spark public uproar in parts of the Arab world and set off a political chain reaction with serious international and regional security implications.

There are numerous other regional factors that must be taken into account before any prediction of potential international security implications can be applied to events in the Middle East, including the foreign policy orientation to be adopted by the emerging Islamist forces. One factor that analysts seem to have ignored, however, is the link between the relative positions of international powers and what is happening in the region. This is quite surprising, given NATO’s intervention in Libya, the strong security relationships between the United States, Egypt, Jordan, the Gulf Arab states, and Israel, as well as the positions taken by Russia and China with respect to the Syrian uprising. Although security relationships between these regional states and the United States have been strong in the past, recent developments have raised the question of how long the United States will support its erstwhile allies. On the other hand, Russia’s and China’s minimal security relationship with the region cannot now be ignored given their ability to block international action, at least temporarily.

These questions and new realities will most likely factor into the security calculations of regional players, driving some to become more independent and wary of foreign support and others to calculate more confidently how they will avoid falling prey to the reactive and ambitious policies of populist domestic and international forces.

The Middle East is changing, and regional and international security ramifications undoubtedly will flow from that change. History has shown that with a few exceptions, the national security decisions taken by states are normally rational. I therefore believe that while change in foreign, regional, and national security practices is bound to occur—as ambitions confront reality—it will be incremental and governed by perceptions of self-interest rather than the intense rhetoric that is being heard today. Thus, it is foolhardy to try and predict the final outcome of this shift. In reality, foreign policy will, most likely, gain only slow prominence in the political tumult sweeping the Middle East.

We should, however, expect that foreign policy decisions will increasingly be affected by public opinion and open debate rather than the wisdom or dictate of leadership alone. Consequently, the best regional and international approach to deal with these new and transformative circumstances should be the embrace of an unwavering commitment to the application of the rule of law, as well as the application of regional and international norms and standards by all states, without prejudice or exception. This is of particular importance in the areas of conflict resolution, arms control, and disarmament. Open, vibrant societies striving for domestic equality will also ultimately take serious issue with political double standards and regional asymmetries, even if their preference will be to redress them through peaceful, diplomatic means.

Ambassador Nabil Fahmy is the Non-Resident Chair of the CNS Middle East Nonproliferation Project. Before returning to Cairo in the fall of 2008, he served for nine years as Egypt’s ambassador to the United States.