An Ohio congressman ignores his own Republican colleagues—and military leaders—and attempts to micromanage the US nuclear arsenal. 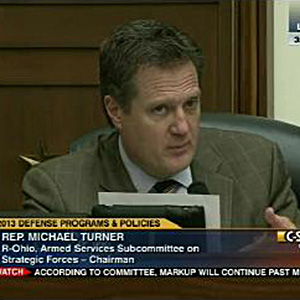 The Fiscal 2013 National Defense Authorization Act (H.R. 4310 )—approved by the House Armed Services Committee (HASC) last week and scheduled for debate and a vote by the full House of Representatives this week—is a serious challenge to the Obama administration’s efforts to maintain a safe, secure, and effective nuclear arsenal. By requiring the Department of Defense (DOD) to spend money it does not have on facilities neither it, the Commander of the US Strategic Command, the National Nuclear Security Administration (NNSA), or the directors of the nuclear weapons laboratories think we need, Rep. Michael Turner (R-OH) and other members of the HASC who supported numerous amendments to the bill are undermining efforts to fund a sustainable nuclear complex and a smaller but effective nuclear arsenal.

During the 2010 debate over ratifying the New START agreement, opponents of the president and the treaty, led by Sen. Jon Kyl (R-AZ), claimed the administration was underfunding the nuclear weapons complex—the facilities, laboratories, and people who maintain the US nuclear arsenal. These accusations came despite the fact that the administration requested a ten percent increase in funding for the complex for fiscal 2011 after a decade of neglect under the previous administration. This ten percent increase was followed by additional increases to make up for real shortfalls created over the last decade, even after the passage of the Republican-led Budget Control Act that requires deep cuts to the federal budget and, especially, the DOD. For example, the fiscal 2013 budget request for nuclear weapons activities at the NNSA is five percent larger (an increase of $363.2 million) than the amount approved by Congress for fiscal 2012.

Two major recipients of this increased funding were the planned design and construction of a new uranium handling facility in Tennessee and a new plutonium facility in New Mexico. Design work on these two facilities has been underway for years, but the big bills for them are coming due. In a tough budget environment—where both parties have agreed to make due with less—these two installations have both rightly received increased scrutiny.

Last year, the Republican-led House of Representatives ignored the Obama administration’s generous budget request, and in their budget cutting fervor the House GOP convinced the full Congress to reduce nuclear complex funding by some $800 million. That’s right—after insisting that the president was not spending enough, Congress—granted the power of the purse by the Constitution—came up short. Faced with this budgetary grenade, the administration was forced to ask the tough question—what can we afford given what Congress is willing to spend?

This funding challenge has real implications for US security and for the global effort to prevent further nuclear proliferation. By investing smartly in our aging nuclear complex, the administration seeks to reduce reliance on large, old nuclear weapons that we don’t need and create a responsive nuclear complex than can not only adapt quickly to geopolitical changes, but can contribute to efforts to track proliferators, secure nuclear materials around the world, and support the intelligence community with advanced technical capabilities.

More aware than most of these challenges, the directors of the three weapons laboratories—Los Alamos, Livermore, and Sandia—suggested a new way forward. Worried that money for these very costly facilities would come at the expense of the people and programs they believe must be funded, they proposed deferring the plutonium facility in New Mexico, after determining that there were other existing ways to process the materials needed to maintain a safe and secure arsenal. This approach was approved by the NNSA and the DOD and submitted to Congress in the 2013 budget request now under consideration.

For the Republicans on the HASC, this solution was unacceptable. Convinced that the administration was not serious about funding the complex, unwilling to acknowledge that their Budget Control Act led directly to the reductions, and blaming the White House for their own colleagues’ decisions, Rep. Turner, who chairs the HASC strategic forces subcommittee, led a Republican effort last week to restore funding for and accelerate construction of the plutonium facility that Congress has already indicated we cannot afford and that the military and technical experts say we can live without. The defense bill coming to the House floor this week requires the DOD to divert billions of dollars from its budget to the NNSA to build both facilities.

However, neither Rep. Turner nor the other members of the HASC who approved the increased funding largely along party line votes have explained what should be cut, allowing them to appear tough on defense without taking any real fiscal responsibility. But if Rep. Turner has his way, the extra money will have to come from either programs DOD leaders believe we do need, or from other parts of the nuclear enterprise—exactly what the laboratory directors sought to avoid when they proposed a prudent five-year delay for the New Mexico plutonium facility.

It is not clear why Rep. Turner thinks he knows better than the uniformed military, the DOD, or the dozens of PhD engineers and scientists at the NNSA, how to manage the nuclear arsenal. Regardless of motive, Turner’s approach is grossly misguided and detrimental to US security, and will lead to a weakened defense and a less efficient nuclear weapons complex.

Jon B. Wolfsthal is deputy director of the James Martin Center for Nonproliferation Studies at the Monterey Institute of International Studies. From 2009-12, he served as the special advisor to Vice President Joseph R. Biden for nuclear security and nonproliferation and as a director for nonproliferation on the National Security Council.

What Do You Think?