Seizing the Opportunity to Create a WMD-free Middle East 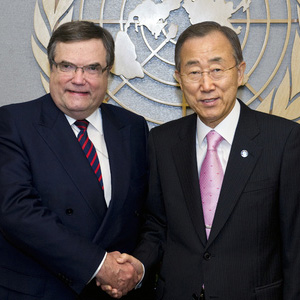 Secretary-General Ban Ki-moon (right) meets
with Jaakko Laajava, Under-Secretary of State for
Political Affairs of Finland and Facilitator of the
2012 Conference on the Establishment of a Zone Free
of Nuclear Weapons and other Weapons
of Mass Destruction (WMD) in the Middle East.
Src: unmultimedia.org, photo #492530

Recent media coverage of the Middle East has been gripped by the remarkable political developments in several Arab countries and has included relentless speculation about the significant implications this regional upheaval will have on the security and political landscape. At the same time, the possibility of an Israeli military strike against Iran’s nuclear facilities has generated extensive attention. Coverage of these two issues, however, has inadvertently overshadowed an upcoming event that has the potential to alter the future security architecture of the Middle East, if its protagonists so choose.

Before the end of this year, Finland will host a conference on establishing a Middle East zone free of nuclear weapons and all other weapons of mass destruction. The conference, endorsed by 189 member states during the 2010 Review Conference of the Treaty on the Non-Proliferation of Nuclear Weapons (NPT), presents a unique opportunity to lay the groundwork for a new security arrangement for the Middle East that would strengthen nonproliferation and arms control measures. At a time where there is endless speculation about Iran’s nuclear program, criticism of Israel’s non-adherence to the NPT, and widespread concern over the potential proliferation of nuclear weapons in the Middle East, this conference provides an exceptional occasion to address these pressing issues in a comprehensive framework. Despite the complexities of the issues, the conference could serve as a cornerstone for a new regional security architecture and become a platform where all states in the region could collectively decide their future security.

Several factors will determine whether the conference is a success. The cosponsors of the 1995 Resolution on the Middle East (the United States, Russia, and the United Kingdom)— which called on all Middle Eastern states to join the NPT and place their nuclear facilities under international safeguards—and the secretary general of the United Nations must demonstrate a sustained political commitment to the goals of the conference. Its success will also depend on the participation of all states in the region, including Israel and Iran (indeed, this will be the first official regional gathering to include representatives from those states and the Arab states following last year’s historic transformation in the political landscape). The readiness and commitment of all participants to undertake the difficult work of defining reasonable guidelines for the establishment of the weapons-free zone is also essential. Participants should not approach the conference as a “one-time” event to air grievances and recite cyclical arguments and longstanding positions. Rather, the conference should usher in the start of a serious and sincere process leading to the gradual establishment of the zone.

Among the reasons the Finnish conference should be taken seriously:

Although the conference represents an important opportunity, the NPT’s depository states have approached it half-heartedly. Notwithstanding their expressed concern with certain nonproliferation issues in the Middle East, it is difficult to detect a serious or sustained political commitment for the conference. Rigorous engagement with the facilitator, Finland’s Under-Secretary of State for Political Affairs Jaako Laajava, on substantive issues needs to be intensified. Remarkably, it took almost a year and a half—from May 2010 to October 2011—to merely appoint Laajava, a responsibility entrusted to the depository states by the 2010 NPT Review Conference, thereby wasting precious time.

The Finnish conference is a valuable opportunity that must not be squandered. A failure by the conference to produce a meaningful outcome could have unpredictable consequences. The transformative change in the Middle Eastern political landscape requires a transformative approach in both policy and behavior from those who have traditionally been unenthusiastic about a regional nuclear weapon-free zone or who have questioned its feasibility. This conference should not be treated as business as usual because business is no longer usual in the Middle East.