Is Biosecurity the Low-Hanging Fruit?

Eliminating biological weapons could be the first step toward creating a Middle Eastern WMD-free zone. 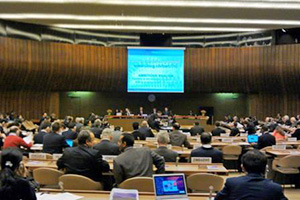 The Seventh Review Conference of the Biological Weapons Convention (BWC) took place in December 2011 in Geneva, Switzerland. The conference focused transparency in bio-industry and biodefense and on confidence-building measures. But the review conference might also contribute to the incremental approach to banning all weapons of mass destruction (WMD) in the Middle East—an approach that will be promoted at a conference later this year in Finland. The future of nonproliferation and disarmament diplomacy in the Middle East relies on eradicating pessimism that such a WMD-free zone is only an aspirational goal, not an urgent objective that can be achieved through practical, incremental steps. Taking action to first eliminate biological weapons, rather than the more controversial nuclear arsenals, and persuading hold-out states to sign and ratify the BWC would help states to achieve consensus and take practical steps toward the WMD-free zone that all states agree in principle.

Why biosecurity? Biological weapons are sometimes called the “poor man’s atomic bomb” because they can be as deadly as nuclear weapons, yet can be built and weaponized by any microbiologist who has access to laboratories and open-source technical information. Under ideal circumstances, weaponized pathogens could be agents of mass murder. Biological weapons appeal to terrorists due to their ability to cause multiple casualties and widespread panic (as in the sarin gas attack on the Tokyo subway in 1995 and the B. anthracis attacks in United States in 2001). Some fear that in the Middle East, unsafeguarded biological agents could be deployed by radical groups against US installations.

A lack of participation in security regimes is the major political challenge in the region. Israel is not party to the BWC. Syria and Egypt have signed but not ratified the treaty. Iran and Libya are parties to the treaty but have engaged in questionable, possibly noncompliant activities. Limited cross-border collaboration increases the national costs to build a unilateral response capacity to biological threats. Given the political turmoil, high level of militarization, tribalism, and continuous nature of hostility in the region, it is too risky to allow states in the Middle East maintain opaque policies regarding their biological arsenals—which are not considered a high priority in their national security agendas. Moreover, population density, geographic proximity, and the threat of non-state actors seizing biological weapons means that all states in the Middle East have a stake in controlling biological agents; this points to the urgent need for security cooperation.

The nuclear-free-zone idea of the 1960s was expanded—by an Egyptian proposal in 1990—to a zone that would encompass all WMD, in order to include Israel in negotiations that would otherwise be deadlocked on nuclear issues. Since Israel is not party to the Treaty on the Non-Proliferation of Nuclear Weapons (NPT), it was not directly involved in the negotiations for the final document of the 2010 NPT Review Conference, which called for the 2012 conference on a Middle East WMD-free zone. However, any Israeli participation within non-nuclear issues would significantly increase the likelihood of success at the meeting. Paul van den Ijssel, the president of the Seventh BWC Review Conference, framed the goal of the December meeting as “ambitious realism” to improve cooperation in peaceful biotechnology, strengthen confidence-building measures, and transform the already-existing subscription to the norm by the Middle Eastern non-parties into BWC signatures and ratification.[1] According to van den Ijssel, the Middle East non-parties abide by the rules but “link the behavior of other states to whether they will join the BWC.” Hence, the upcoming conference in Finland presents an opportunity to move beyond these linkages and formulate a solution to enhance BWC participation in the Middle East.

Creating a protective oversight system can be successful in a region where no state has demonstrated a major motivation to deploy biological weapons. Even though Israel, Iran, Egypt, and Syria are believed to have biotechnology infrastructure capable of agent development, there is no evidence of ongoing agent production or stockpiling of biological warfare agents. As Amy Smithson discusses in her new book Germ Gambits, the lessons learned from the United Nations inspections in the 1990s in Iraq to uncover Saddam Hussein’s covert bioweapons program could be adapted for future verification regimes in the region, as inspectors can detect weaponization by checking agent quantities and drying capabilities, and biosecurity can be enhanced to minimize the risk of terrorist access.

The 2010 NPT Review Conference achieved small but concrete steps toward the Obama administration’s nuclear nonproliferation goals. Similarly, the success of the 2012 conference on a Middle East WMD-free zone can be encouraged by first taking steps toward biosecurity. Such steps include agreeing on common principles of biosecurity, erasing the failure of the Arms Control and Regional Security framework due to the Egyptian-Israeli disagreement on the nuclear issue, and maintaining the momentum of “change” in the region.

Nilsu Gören is a Ph.D. student at the University of Maryland School of Public Policy and a graduate fellow at the Center for International and Security Studies at Maryland (CISSM.)