An intergovernmental group is sharpening global financial controls to prevent the financing of WMD proliferation and terrorism. 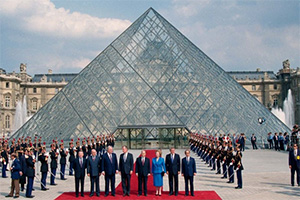 Nearly ten years after the September 11, 2001 attacks, authorities are still refining the tools to fight terrorism and proliferation via financial channels. At the vanguard of these efforts is the thirty-six-member intergovernmental Financial Action Task Force (FATF). Since its inception more than twenty years ago, the FATF has worked to help states fight criminal uses of the financial system worldwide. In its efforts to keep up with current threats, the FATF has taken aim at not only cutting off terrorists’ financial networks, but also , most recently, at preventing proliferation financing.

At the close of its recent plenary meeting in Mexico City this June, the FATF announced plans to strengthen international standards for combating illicit financial activities and to improve the application of UN-mandated financial sanctions, measures that may next be extended to efforts to counter proliferation-related financing. Based in Paris, the FATF is a policy-making body that first convened in 1989 (at the behest of the G -7) to formulate measures to combat the laundering of drug money, resulting in the so-called 40 Recommendations that FATF members have since worked to implement. In October 2001, just weeks after 9/11, the FATF broadened its mandate to also address terrorism funding, issuing eight recommendations that specifically focus on combating the financing of terrorist acts and organizations; a ninth was added in 2004. The so-called 40+9 Recommendations quickly became the global standard for implementing measures to prevent money laundering and terrorist financing.

In 2008, the FATF again expanded its mandate, adding the need to respond to proliferation financing—that is, the funding of WMD proliferation activities, including supply and procurement networks.

The FATF’s ongoing efforts to refine its standards include consulting with financial institutions and other stakeholders. On June 27, it released a consultation paper that contains a proposal to reinforce Special Recommendation III, which covers freezing and confiscating terrorist assets and would be a complement to the obligations of UN Security Council Resolutions 1267, which imposed sanctions on the Taliban, and 1373, which mandated states to prevent and criminalize the financing of terrorism. The proposed changes make clear that the assets of entities that are believed to be financing terrorism may be frozen provisionally to enforce targeted financial sanctions—even in the absence of criminal proceedings. Targeted financial sanctions require member states to freeze the assets of—and prohibit the provision of financial services to—entities designated as funding terrorist organizations or acts.

The consultation paper further noted that “FATF is also discussing whether and to what extent it would be useful to extend similar requirements to [targeted financial sanctions] in the proliferation financing” context (emphasis added)—in line with existing UN Security Council resolutions (UNSCRs) that impose sanctions on Iran and North Korea—to help “jurisdictions in implementing the targeted financial sanctions requirements of such UNSCRs.” This could be a boon to nonproliferation; the United States already uses targeted financial sanctions to fight proliferation financing in the absence of criminal proceedings and has found them to be a very powerful enforcement tool, as illustrated by the freeze in 2005 of $25 million in assets held at Macau-based Banco Delta Asia for its criminal association with Pyongyang and a $88.3 million settlement last month by JPMorgan Chase for transactions with sanctioned Iranian, Cuban, and Sudanese entities. The June 27 consultation paper opens the door to the FATF adopting this approach more widely.

The FATF is also working on two other proposed revisions that would enhance intelligence and law enforcement efforts to combat terrorist financing: 1) requiring FATF members to give greater prominence to the investigative authority of national financial intelligence units, rather than treating them merely as administrative organizations; and 2) improving mutual legal assistance among FATF members, thereby facilitating the prosecution and conviction of those involved in illicit financing activities. These potential revisions, on which the FATF is still consulting, will be considered for adoption at the FATF plenary meeting in February 2012. These revisions could also strengthen the FATF’s work to counter proliferation financing.

One of the ways that the FATF fights the criminal exploitation of financial systems is by helping members implement the financial provisions in WMD-related UN Security Council resolutions; the FATF has issued three sets of guidance to this end, which have been explicitly welcomed by the UN Security Council. In addition, in 2008 the FATF issued its “Proliferation Financing Report,” which aimed to develop standards for the more effective implementation of the financial provisions in UNSCR 1540. (Resolution 1540 requires all UN member states to prohibit non-state actors from financing WMD development and to control the export and trans-shipment of WMD-relevant items as well as the funding of such activities.) The 2008 FATF report on implementing UNSCR 1540 was the first publicly available, comprehensive analysis of international safeguards against the misuse of the global financial system by proliferators, and it built on the FATF’s earlier experience providing guidance to its members and associated regional bodies on implementing UN sanctions against Iran and North Korea.

The “Proliferation Financing Report” had been prepared by a FATF subgroup that later morphed into the Proliferation Finance Project Team and was tasked with developing policy options for the FATF to consider in combating proliferation financing. The project team consisted of twelve FATF members—Australia, Canada, the European Commission, France, Germany, Italy, Japan, the Netherlands, South Africa, Switzerland, the United Kingdom, and the United States—together with three international organizations—the Egmont Group (an informal group of national financial intelligence units), the Council of Europe’s Committee of Experts on the Evaluation of Anti-Money Laundering Measures and the Financing of Terrorism (also called MONEYVAL), and the United Nations. In February 2010, the Proliferation Finance Project Team published a Status Report on Policy Development and Consultation, which presented a broad palette of recommendations on ways to combat proliferation financing that the standard-setting organ of the task force should consider. These include adapting risk assessment tools—already employed in counter-terrorist financing and anti-money-laundering—to proliferation financing and wider information sharing with financial institutions. The FATF has held at least eight meetings, some of which also involved the private sector, to discuss the proposals.

Despite its ongoing work, the FATF’s efforts to address proliferation financing lag behind its measures to counter the financing of terrorist activities and appear to be considerably more cautious than other international efforts to control sensitive nuclear commerce, such as the June 2011 decision of the Nuclear Suppliers Group to strengthen the rules limiting transfers of sensitive enrichment and reprocessing technology. Thus, despite the progress made at the FATF’s recent plenary meeting, much work remains to fully realize the promise of anti-proliferation financial controls.

Javier Serrat is a Scoville Fellow at the Washington, DC office of the James Martin Center for Nonproliferation Studies. The author thanks Leonard Spector for his valuable comments and suggestions.