Carmageddon: How Californians Learned to Stop Driving and Love the Bomb

What a traffic jam that wasn’t teaches us about the credibility of nuclear threats. 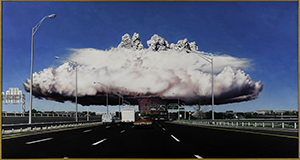 As Californians and many people in the United States know, the two-day closure of a critical highway in Los Angeles last weekend was predicted by some to lead to a so-called Carmageddon. How does such a word come into existence and reach the status of a ritualized utterance? Combining a monster traffic jam and the apocalypse is far from obvious, after all. How can gridlock on the roadways be compared to mass death? The use of the word as the title for a violent video game, the media’s tendency to sensationalize the news, and the Californian focus on the Hollywood past of mass destruction of its former governor are not enough to account for this strange portmanteau word.

Carmageddon joins two symbols of American culture: cars and nuclear weapons. Armageddon might take many non-nuclear forms, but, when he visited the construction site last Saturday afternoon, County Supervisor Zev Yaroslavsky made explicit the nuclear undertones of the word: “This reminds me of the movie On the Beach.”[1] That 1959 film is set in a post-nuclear war Australia. The unexpected associations condensed in “Carmageddon” therefore provide a mutually reinforcing dynamic between two American cultural icons: cars as unique providers and symbols of freedom, and nuclear weapons as unprecedented guarantors of peace through credible threats.

On the one hand, that Carmageddon did not happen reassures the American faith in the effectiveness of nuclear threats. Threatening nuclear retaliation is supposed to deter another nuclear power from striking first. Likewise, announcing that there would be a Carmageddon if drivers took Interstate 405 was supposed to deter them from doing so.

The behavior declared unacceptable and likely to lead to a damaging reaction is well specified in both cases. And in both cases, the capability to create the damage exists and is well known. If they had ignored the warnings, weekend drivers on Interstate 405 had the potential to trigger Carmageddon, just as during the Cold War ignored warnings could have triggered the use of the US and Soviet nuclear arsenals, leading to massive destruction and, possibly, Armageddon.

Both cases carry the idea that for a deterrent threat to work, the expected consequences of noncompliance have to be exceptionally damaging. Carmageddon cannot be just any old traffic jam, and a nuclear attack must be perceived as vastly more destructive than a conventional one. In both cases, the threat must be credible. The target of the threat must believe that there is a sufficiently high probability to suffer the consequences in order to choose not to act.

Repetition can be a tool for publicity and thus enhance credibility. Dr. Strangelove’s famous comment from Stanley Kubrick’s 1964 film of the same name says it all: “The whole point of the Doomsday Machine is lost if you keep it a secret.” Thus, California officials and others warned for months that Carmageddon was coming, hoping that doing so would prevent it.

All the basic components of rational deterrence theory are at work in the Carmageddon drama: the specification of one undesired behavior that will trigger retaliation, the threat of unacceptable damage formulated in the hope that it will work as a self-denying prophecy, the publicity of the capability to inflict that damage, and the various efforts to make the threat credible.[2] And guess what? It works! Carmageddon did not happen. And its non-occurrence provides the confirmation that nuclear deterrence theory will never get: we have no doubt that it worked because between July 15 and July 18—not much changed in Los Angeles, apart from the prospect of a huge traffic jam. Absent all the warnings, we can be sure that few drivers would have altered their routines. That they did can be credited to the effectiveness of the threat. And that threat consisted of only one thing—a massive traffic jam.

On the other hand, invoking Armageddon to describe nothing more than two days of immobilization in the worst-case scenario demonstrates how much the car has retained its liberating power in the American mindset, particularly in California. Following on his analogy with On the Beach, Yaroslavsky added: “No one is out, no one is driving.”[3] The absence of cars should suggest the success of a nuclear threat, and it does. So why choose a comparison with On the Beach and the nuclear-hastened end of mankind? The absence of cars, like immobilization, is the absence of a living freedom, the death of a culture.

Benoît Pelopidas is a postdoctoral fellow at the James Martin Center for Nonproliferation Studies. He thanks Nadine Locchi, Jonathan Pearl, and Stephen Schwartz for their suggestions and criticisms on earlier drafts.

[2] One might argue that the threat of Carmageddon intended to change the drivers’ course of action rather than maintain the status quo, which would make it a case of compellence rather than deterrence. However, Carmageddon might be read as suggesting the validity of nuclear threats in general. Given that most people believe nuclear threats are deterrent threats only, they would probably neglect this analytical distinction.

[3] Quoted in “Carmageddon: ‘It’s Dead as a Doornail out There,’ Official Says.”