The U.S.-Russian Agreement on Civilian Nuclear Cooperation enters into force and Russia agrees to conduct feasibility studies into the conversion of six nuclear research reactors. 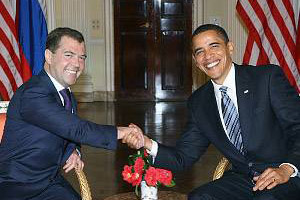 While public and media attention has been focused on the U.S. congressional debate on the New Strategic Arms Reduction Treaty (New START), two other and no less significant U.S-Russian nuclear agreements are quietly entering into force. On December 9, 2010, the clock ran out on the legally required 90 day congressional review period for a bilateral U.S.-Russian civil nuclear energy cooperation agreement (also known as the 123 Agreement), with Congress not registering sufficient opposition to derail the deal. U.S. and Russian officials say they expect to exchange notes by the end of this year to finally bring the agreement into force. For nearly two decades, Russia has sought such a pact for both commercial and political reasons. On December 7, 2010, U.S. Deputy Energy Secretary Daniel Poneman and Rosatom Director General Sergei Kiriyenko signed an agreement to conduct feasibility studies into the conversion of six Russian research reactors from dangerous highly enriched uranium (HEU) to more secure low enriched uranium, an important step in President Obama’s effort to secure all vulnerable fissile materials worldwide in four years.

The nuclear cooperation agreement is perhaps as important as New START in carrying out the Obama administration’s goal of resetting U.S.-Russian relations on a more cooperative path. Russia, still suffering from memories of the Chernobyl disaster and smarting from past tensions with Washington, gains a long-desired seal of approval from the United States as a responsible nuclear energy producer. It also “creates new commercial opportunities for Russian and American industry,” as Secretary Poneman highlighted.[1]

The U.S.-Russia agreement lifts a number of historical limitations on commercial nuclear trade and can be seen as an acknowledgement of Russia’s more cooperative stance towards sanctions on Iran (Russian assistance to Iran’s nuclear program has been the main obstacle to U.S.-Russian civil nuclear cooperation in the past). By creating new opportunities for Russia’s powerful nuclear energy industry, the U.S. government hopes the agreement will help further that industry’s shift toward the nonproliferation mainstream and away from more marginal customers such as Iran.[2]

The nuclear cooperation agreement was originally submitted to Congress for review by the George W. Bush administration in May 2008, in part as an effort to bolster bilateral cooperation between the United States and Russia on issues beyond the agreement’s scope (for example, on the question of Iran’s nuclear program). However, the administration withdrew the agreement from Congress following Russia’s war with Georgia in August of that year, as the U.S.-Russian relationship hit a post-Cold War low.

President Obama resubmitted the agreement to Congress in May 2010 as part of his ‘reset’ policy with Moscow. The reset aimed to move the U.S.-Russian relationship out of the shadow of the Georgia conflict in order to gain Russia’s cooperation on Iran, the war in Afghanistan, and other regional issues. At summit meetings between Obama and Russian President Dmitry Medvedev in April and July 2009, the two presidents committed to bring the 123 Agreement into force.[3]

Although the agreement did not require legislative approval, it could have been rejected by Congress if both houses had passed a resolution of disapproval within 90 legislative days of its submission. Two resolutions of disapproval were in fact introduced but not approved.[4] As a result, the 90 day period lapsed on 9 December and the pact will now enter into force once the exchange of notes is completed.

The agreement creates a broad legal framework for cooperation on nuclear research, production and trade, thereby removing obstacles to collaborative work on next-generation nuclear reactors and the development of fuel cycle technologies.[5] This means that Russian companies such as the state nuclear fuel producer Tekhsnabexport (TENEX) will now be free to cooperate more closely with U.S. enterprises such as Westinghouse and General Electric. There are also indications that Rosatom may explore the possibility of establishing a uranium enrichment plant in the United States.[6]

One element of the agreement that has proved controversial with Russian environmental groups is that it theoretically allows Russia to import, reprocess and store spent fuel from U.S.-supplied reactors located abroad.[7] Past Russian government estimates indicated that spent fuel importation could prove to be a lucrative venture, bringing in as much as $20 billion over ten years.[8] There is little support for such a move among the public, however, and Russian environmentalists have objected to the 123 Agreement on the grounds that Russia might import spent nuclear fuel from the United States or U.S.-origin spent fuel from third countries. However, Russian importation of spent fuel from the United States has never been at issue, and Rosatom spokesman Sergei Novikov stated at a December 7, 2010 press conference that Russia will only accept spent fuel from Soviet- and Russian-built nuclear reactors.[9]

Presidents Obama and Medvedev agreed at their July 2009 summit in Moscow to conduct feasibility studies on the prospects for conversion of HEU reactors in Russia.[10] The December 7 agreement between Secretary Poneman and Rosatom’s Kiriyenko, signed during the U.S.-Russia Nuclear Energy and Nuclear Security Working Group Meeting in Moscow, formalizes the details of the study and marks an important first, albeit tentative, step towards the conversion of approximately 35 Russian nuclear research reactors that continue to run on HEU fuel.[11] Total civilian HEU holdings in Russia are estimated to be around 15-30 metric tons (MT) (enough for 600-1200 Hiroshima style atomic weapons)[12] but these numbers remain uncertain.[13]

The six research reactors that are believed to be covered by the agreement in question are:

Although the conversion of these six reactors would be an important first step, most HEU fueled research reactors in Russia are critical assemblies that are mockups of other HEU-fueled reactors, space reactors and naval reactors. Some critical assemblies also use weapons grade HEU to simulate fast reactor technology and Rosatom claims it is technically impossible to replace HEU with LEU in critical assembly testing for fast reactors — a view shared by most scientists.[15] A number of Russia’s critical assemblies, such as the BFS1 and BFS2 at the Institute for Physics and Power Engineering in Obninsk,use large quantities of HEU in the reactor core, requiring them to maintain sizeable stockpiles of the dangerous material. For instance, the BFS facility that houses the assemblies in Obninsk contains 8.7 tons of 36 percent and 90 percent enriched uranium.[16] In addition, Russia will need to convert several pulse-type reactors that generate high neutron fluxes and utilize high quantities of HEU. In this case, however, it should be possible to use neutron codes to simulate the reactor cores of pulse reactors— and critical assemblies—so that explicit mock-ups are not necessary.[17]

The elimination of HEU in Russia’s civilian sector is likely to encounter a number of obstacles. First, if reactors are shut down, then their decommissioning and the disposition of fresh and spent nuclear fuel will prove to be a financial challenge. Second, HEU fueled reactors may be considered a source of prestige in Russia with institutions reluctant to close the door to future nuclear research that may require HEU. Finally, in order to convert many of the reactors, suitable fuels will need to be developed.[18] However, there is an ongoing effort between the United States and Russian Federation, through the Reduced Enrichment for Research and Test Reactors program, to develop high density LEU fuels that enable LEU to be used without changing the physical dimensions of the reactor core.

The December 7 agreement indicates that feasibility studies will be undertaken to determine whether or not the conversion of the six initial reactors listed above is economically viable. The joint statement from the Nuclear Energy and Nuclear Security Working Group Meeting indicates that the first working group on the feasibility studies will be convened within three months.[19]

Although Russia has cooperated with the United States for some time on the conversion of research reactors in third countries, and repatriated large quantities of Soviet- and Russian-origin nuclear fuel, Moscow has not yet taken any significant steps toward the conversion of its own nuclear research infrastructure. This point was acknowledged by Sergei Kiriyenko when he stated that “it is right […] we set an example in our countries.”[20]

Converting Russian research reactors is a vital pillar in the phasing-out of civilian HEU as the 15-30 MT of HEU that Russia possesses constitutes more than half of the world’s total civilian stocks.[21] As a result, the proliferation threat from civilian HEU will remain until Russia takes significant steps to begin a phase-out of this material. Eliminating its use in research reactors will also help eradicate demand for HEU and the need for its production at fuel cycle facilities — a major component in lowering the overall proliferation threat.[22] Furthermore, the elimination of civilian HEU in Russia will help establish an international norm to convince other countries to give due recognition to the threat.[23]

As the New START ratification debate rages in the U.S. Senate, the 123 Agreement moves quietly towards entry into force and—perhaps from the Russian perspective at least—provides as much of a basis for a reset in U.S.-Russian relations as the arms control treaty. Not only does the 123 Agreement provide extensive commercial opportunities in the nuclear sector for both countries, but it may also help secure greater Russian support for U.S. nonproliferation policies. A closer commercial and nonproliferation relationship may also provide the United States with greater leverage in convincing Russia of the need to convert the large number of nuclear research reactors that are stationed on its territory.

[10] “Joint Statement by President Barack Obama of the United States of America and President Dmitry Medvedev of the Russian Federation on Nuclear Cooperation,” July 6, 2009.